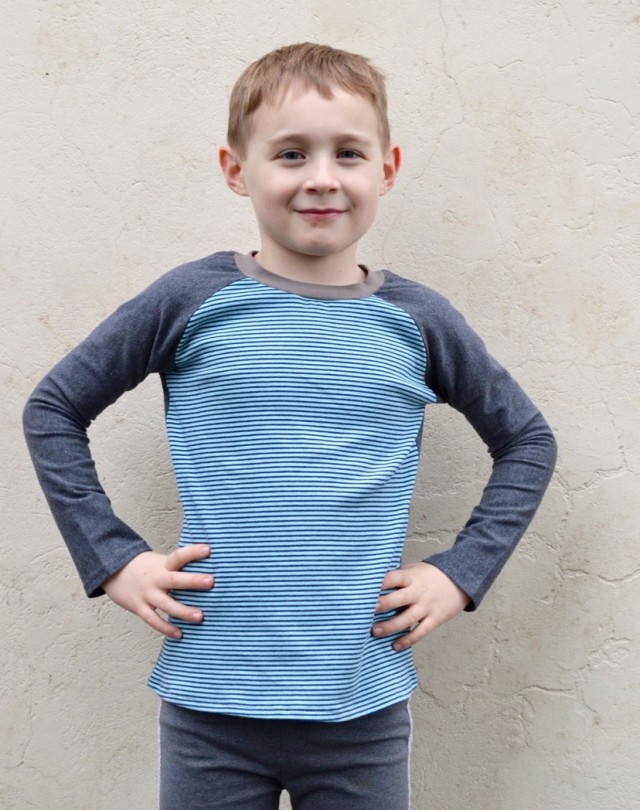 It is pretty well-established how much I like my boys in raglan tees.  I’ve been making these tees for so long that I’m no longer working off the real pattern (from *Sewing For Boys) and am just adapting a pattern that was previously adapted. A tweak of a tweak.  I’ve realized that my kids arms grow bigger and they get taller in a greater proportion than they grow outward and I just make adaptations based on that general information.  It seems to be working.  It will come as no surprise then to hear that I have made my (by-now) compulsory raglan tees for this Kid’s Clothes Week.

But seriously, is there anything cuter than a kid in a raglan top? Their miniature shoulder blades are just extra cute. 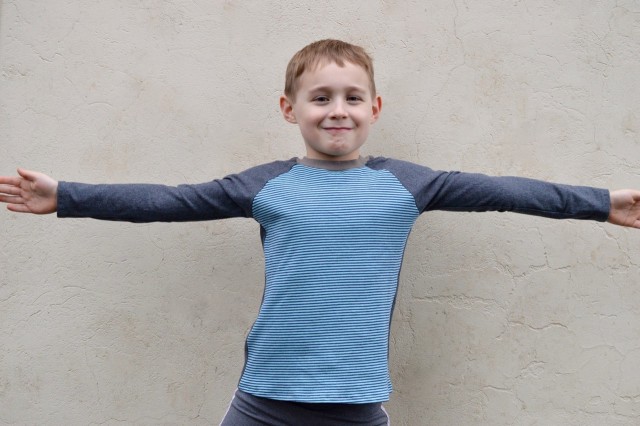 And…a great way to be <ahem> frugal.  And, by that I mean cheap.  These tees are the handmade mamas sewing room version of kitchen sink casserole.  Basically, the different color blocked portions allowed me to use up the bits and bobs of fabric I have leftover from other projects. The sewing equivalent of raiding the refrigerator to make dinner.

I hate wasting fabric so this was super satisfying and even creatively challenging….plus, cheap.  Did I mention that? I made three tees that were basically constructed of fabric I had no other use for.  Wahoo!

This grey-blue-beige top is composed of scrumptious Cloud 9 knit and two different laguna knits I got at Rock Paper Scissors.  I never would have put these three fabrics together but I absolutely love how they look. 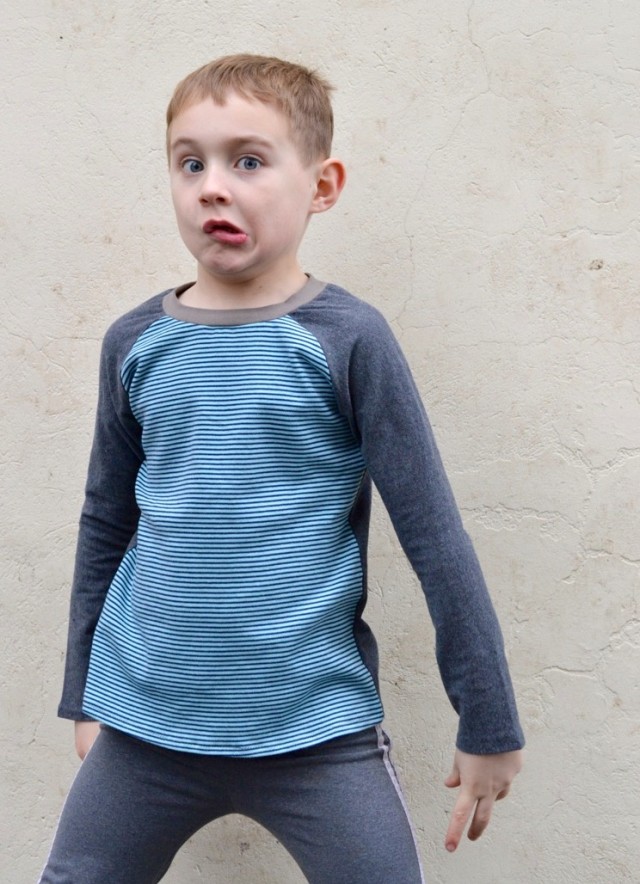 This kid, on the other hand.  Whew, he is such a scrumptious, adorable, ball of pure human energy. Sometimes people don’t quite understand when I describe J as imaginative and energetic and then conclude by saying, “He is my wild child.”   See the photo above for proof.  I can’t get a decent picture to save my life.  He is either in constant motion or dead asleep.  This crazy face photo was one of the best shots. 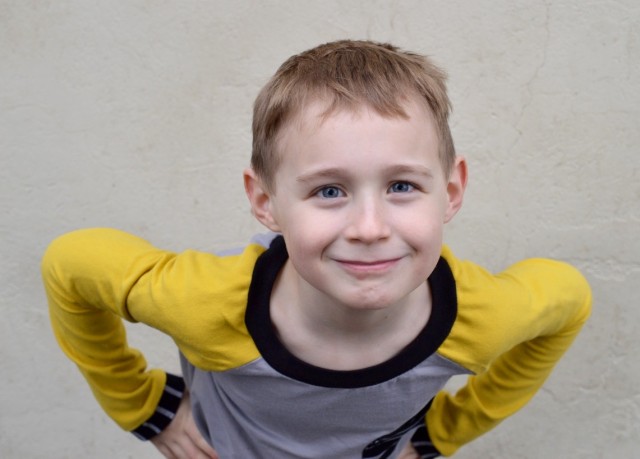 Of course, he is heart-meltingly adorable. 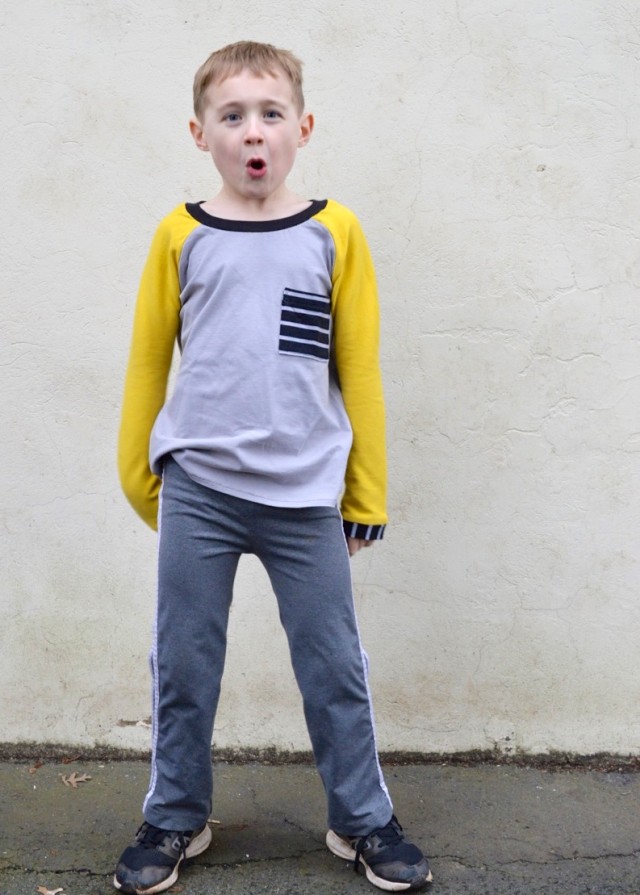 This top was also a mix of laguna knits and Cloud 9 knits with a dash of Riley Blake stripes.

This top is one size bigger than the others, so he can grow into it.  He is crazy about the striped pocket.  Speaking of stripes….the wild child is really into this raglan tee.  The stripes are what remained of the Riley Blake. 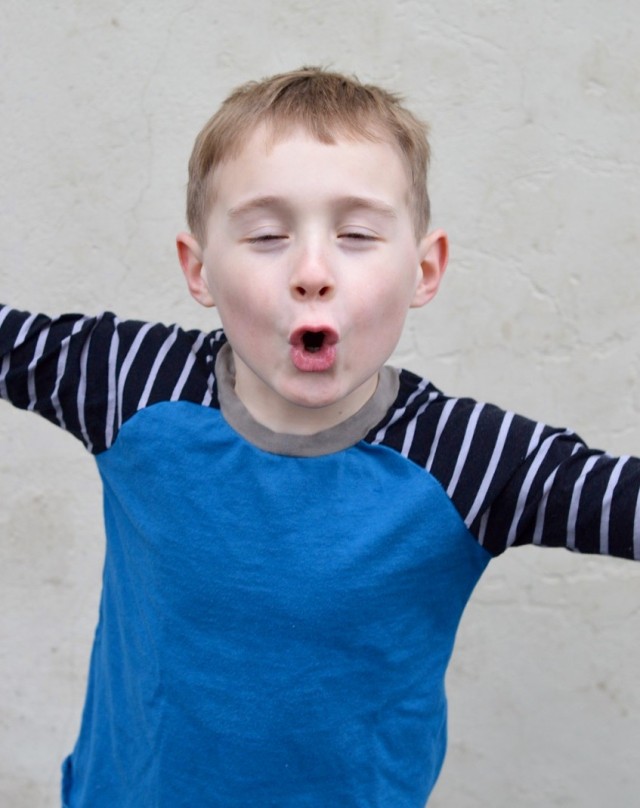 And the blue is some of what remained of his mailbox costume from a previous Kid’s Clothes Week. It is from Andover and is ridiculously soft. 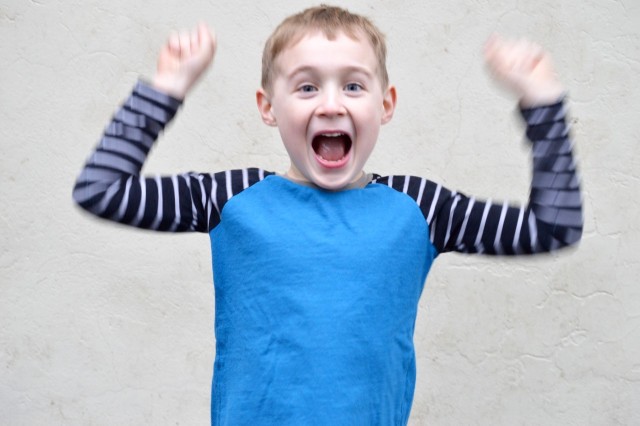 This wild child full of attitude and cuddliness and jokes and the very best of being a first grader is happy with his shirts. He’s claimed victory.  Literally, he raised his arms and I said, “victory!” at which point he walked away saying, “you said victory, that means we are done!” Ha!! So I guess that is what it means. 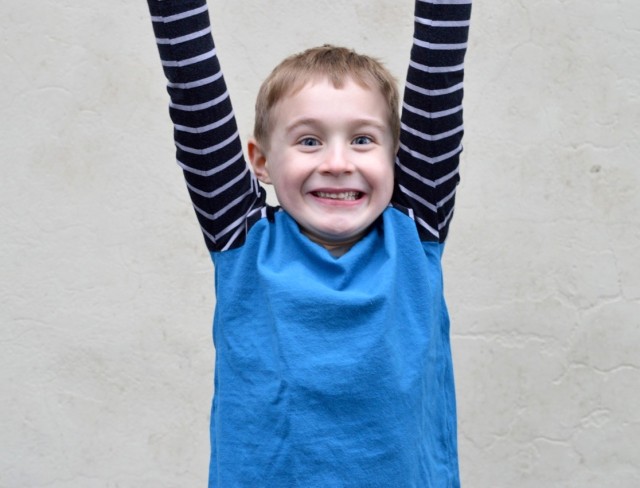 P.S. Some of you may be wondering why I’m not including C much anymore.  Well, he’s a bit older now and has declared he doesn’t want to me to take his picture.  I always wondered when the time would come that their stories are no longer mine to tell and he’s had the self-awareness to know that for himself. So, I’m accepting it. I’m also a wee bit proud of him for knowing.

Disclosure: The link with an * is an affiliate link to Amazon.  You should buy this book (if you want to) from your favorite local bookstore. But, if you decide to purchase it on Amazon through this link, I thank you for your support.