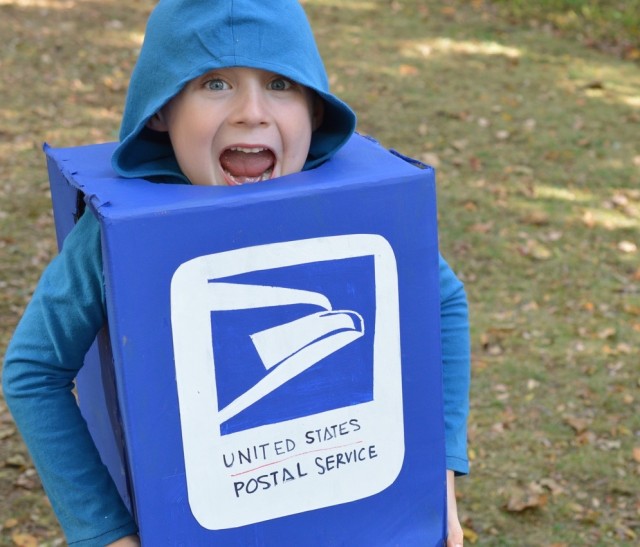 I am not normally the kind of crafty-mama that makes Halloween costumes. Everyone assumes that I do because, apparently, most of the crafty mamas in the world are all over Halloween costumes.  The truth is, my kids usually change their mind in the lead up to Halloween and they tend to want very specific costumes such as characters from their favorites games or shows. I don’t like sewing drama so I tend to stay out that last minute, this-doesn’t-look-like-Obi-Wan-Ken-Obi mess. This year, however, was very different.  J decided months ago that he wanted to be a mailbox.  I thought this idea would pass but he was telling everyone we saw “I’m going to be a mailbox for Halloween”.  Experience told me, “he still might change his mind, don’t jump into making anything”.  Another month passed and he stuck to this idea; getting more and more excited.  Thankfully, my husband was a believer and got started painting a blue box in ‘Postal Blue’.  There was no denying, this kid wanted to be a mailbox. As it was Kid’s Clothes Week and all, I finally converted to believer.  We painted a logo and I got busy sewing an entirely blue outfit with a hood to complete the look. 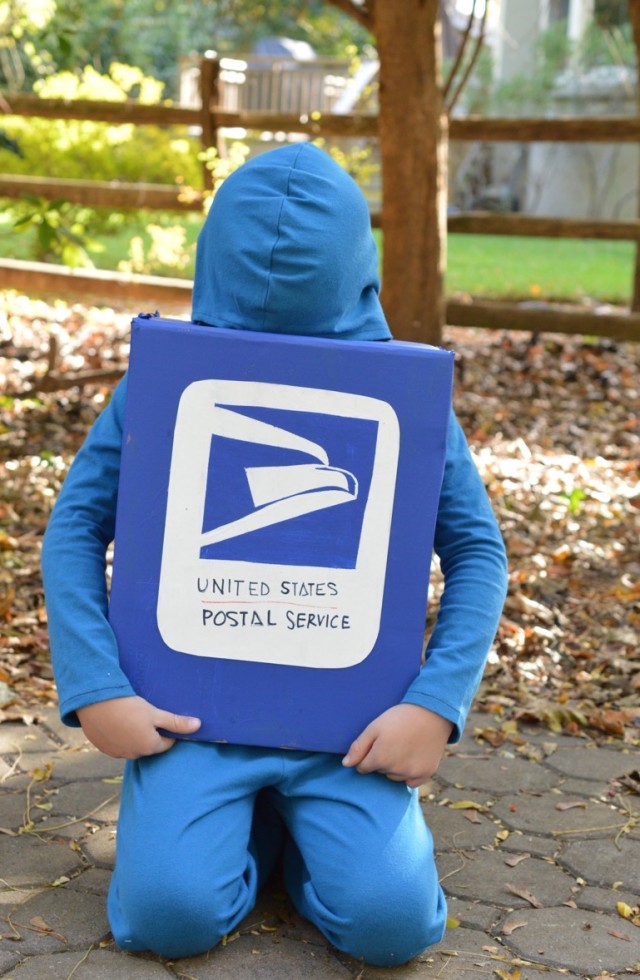 Ooh, SURPRISE, it’s really a kid dressed as a mailbox! We almost fooled you there, didn’t we? 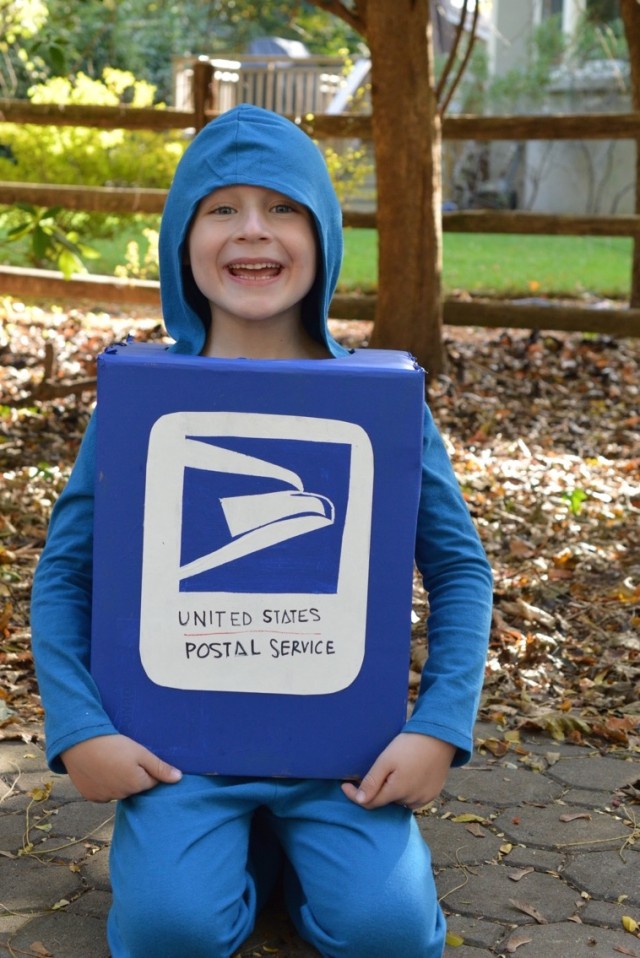 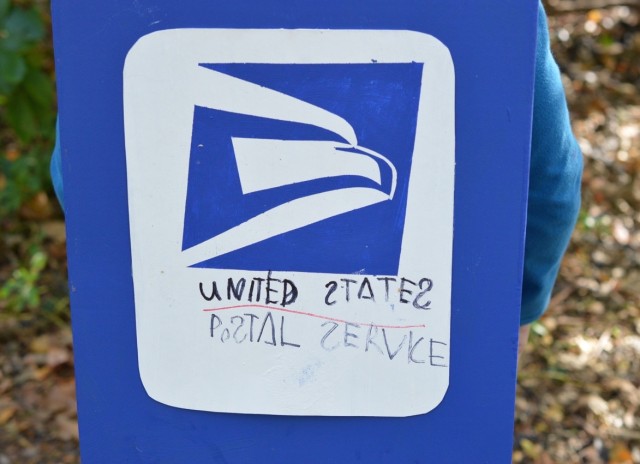 J and I sat together and worked on making the logo.  I cut out pieces of contact paper and placed them on a piece of cardboard painted white and he painted the blue around it.  J also wrote out the words on one of the logos (for the back) and then got bored and wanted me to write the other one (for the front).  I’ve never in my life appreciated the design and font of the postal service like I do now.  Check out their A the next time you get a chance, it’s kind of cool.  Plus, this eagle! Very sleek. It was nerve-wracking trying to replicate it. I am absolutely in love with how his little kid writing looks up there.  Such an adorable scrawl. 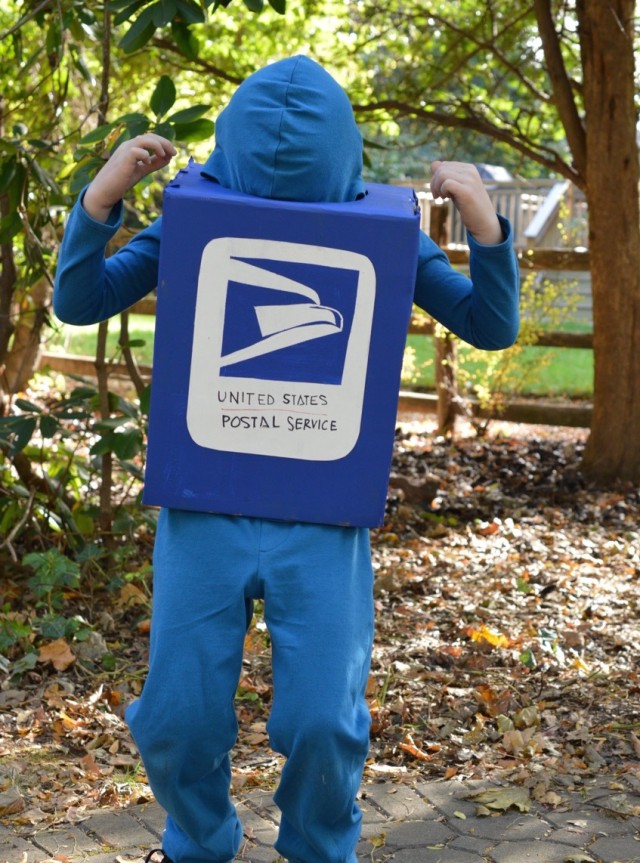 For his outfit, I made a raglan tee from the Sewing For Boys book. I’ve made so many of these tees, like here and here.  I had to grade up a size from what the pattern offers (my kids have aged out of this pattern! Wah!) but it keeps on working for me. I also added a self-drafted hood to stand-in as the top of the mailbox.  The pants are a simple elastic waistband pair of Twisted Trousers from Titchy Threads, another standby of mine. I’ve made so many pairs of Twisted Trousers that it doesn’t take long for me to finish them.

And the gorgeous blue fabric? That is a stunning jersey knit fabric newly released out of Andover fabrics, designed by Alison Glass.  I got mine at Rock Paper Scissors.  The blue is stunning and it’s super, super soft.  It’s very wide so a little goes a long way and it’s on the thicker side…almost like a french terry but not quite that thick. It is a jersey knit but without any spandex so it doesn’t have much stretch to it. I wanted to roll up and sleep on it. 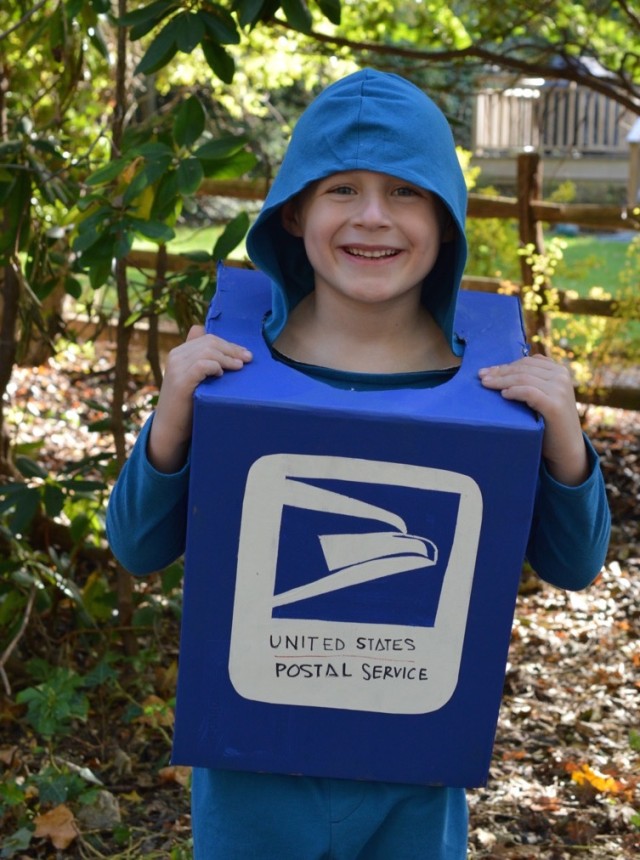 He is so thrilled with this costume, it’s been so much fun to pull it together.  One of the things J really wanted was to avoid changing out of his clothes at school and this costume satisfies that requirement.  He can dress in his all-blue outfit most of the day and then pop the box on and he is ready for the school parade and then some. 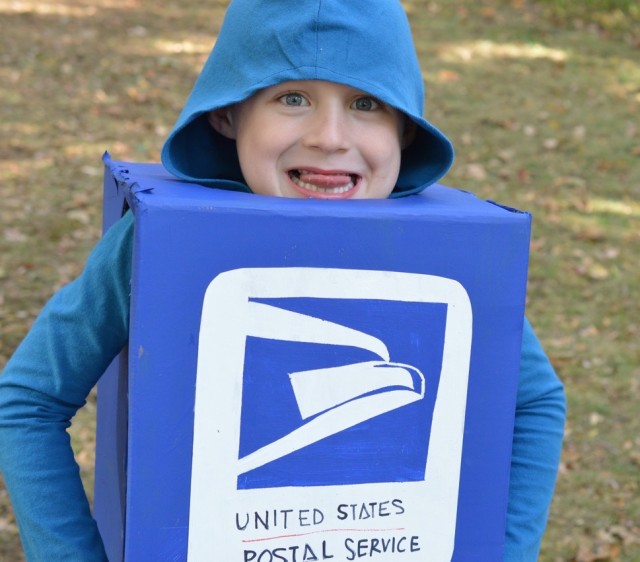 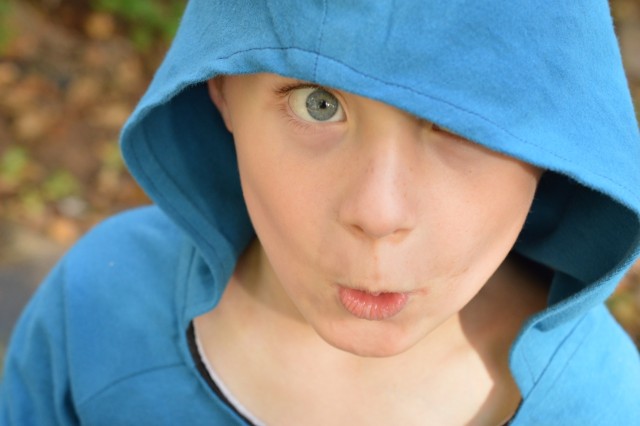 Bring on the candy, man.  We are ready for it.  And, if he wants to be a smurf next year we will have a head start!

This post includes some affiliate links, meaning if you click and the link takes you to Amazon and you buy something, I make a few cents.  Thanks for supporting my coffee habit!