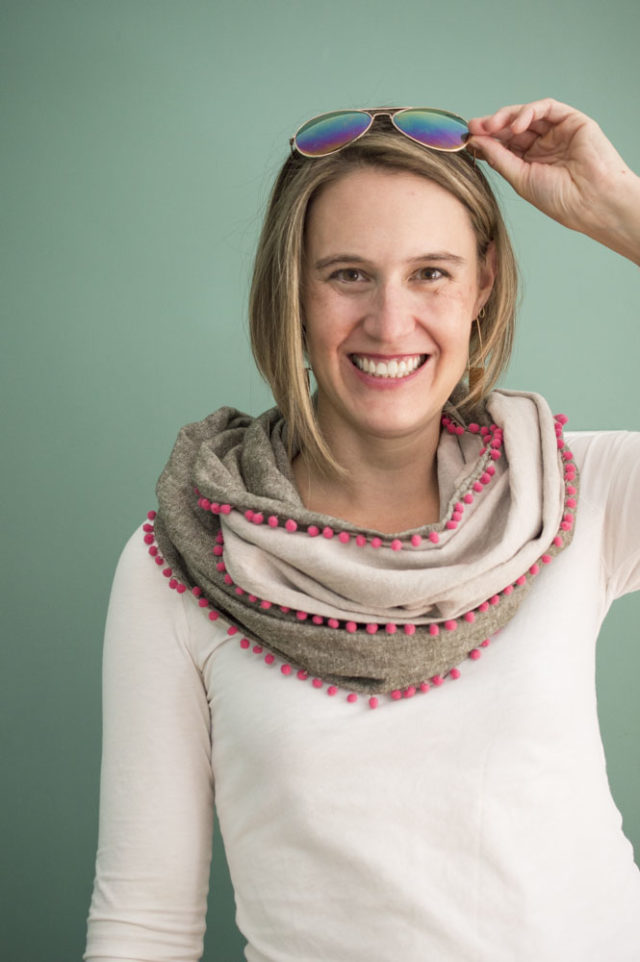 I don’t want to boss you around or anything but you are gonna want to put down whatever you are doing and make a linen and pom-pom infinity scarf. Or, maybe make a dozen…just to be sure you are ready for the holidays.  Why linen and pom-poms? Because, dude, they are amazingly fun together! 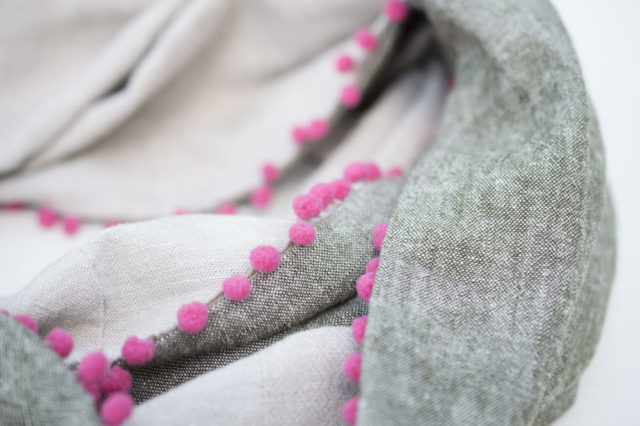 I was inspired to pull together this scarf when I saw a friend of mine wearing something similar and I couldn’t stop staring at it (most of my friends are used to this odd habit by now).  I was smitten with my friend’s scarf and had to figure out how to create one for myself. The combination of neutral fabrics with the playful fun of pom-poms was just so perfect.  I really strive to wear what I sew and this scarf has that perfect quality of being super wearable basic without being a boring basic. I have already worn in a handful of times. It was also so easy to make that I knew I needed to pull together a quick tutorial.  I’m happy to show you how I did it!

I’m also really happy to get a chance to teach how to make them at Urban Sewciety in a few weeks.  So, local friends be sure to join the class so we can ogle over them together. 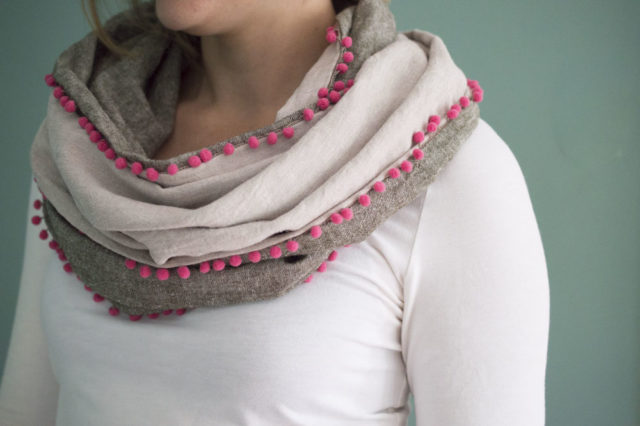 1 and 1/4 yard different colored linen, pre-washed (or 2 1/4 yard of the same color if you prefer a single color)

4 and 1/2 yards of mini-sized pom-pom trim, such as this. Large-sized pom-poms will get too heavy and droopy so stitch with the minis. 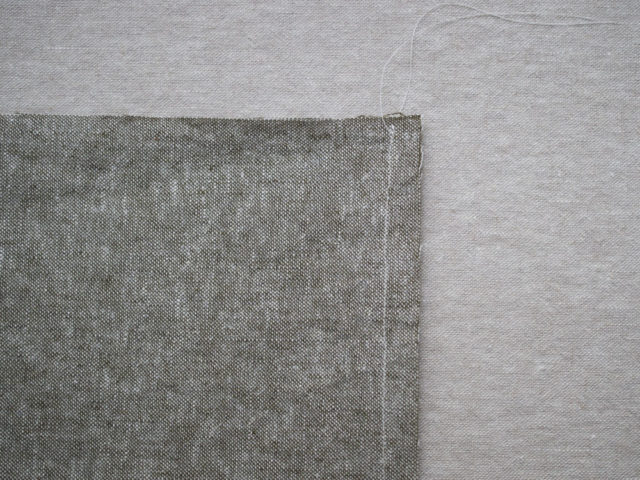 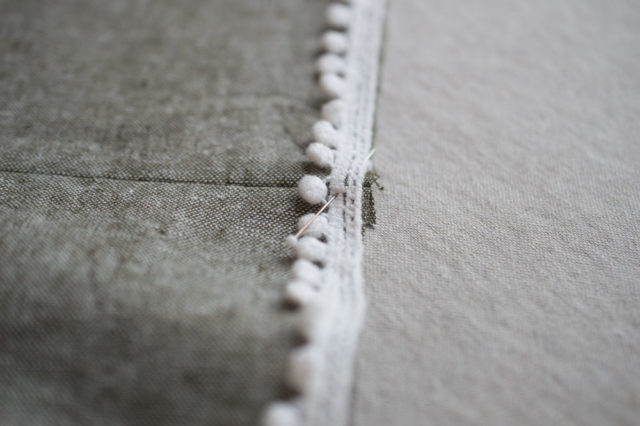 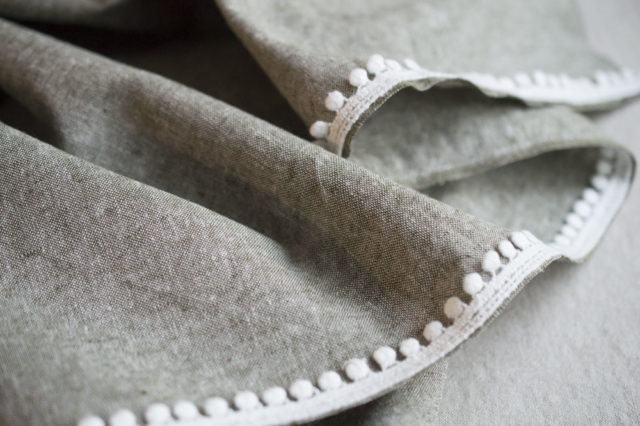 4. Pin the black linen, right sides together, with the pom-pommed olive linen piece. 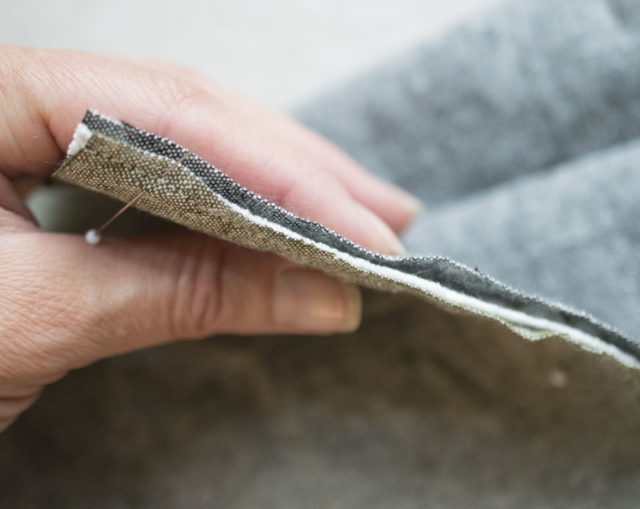 Note: Be sure to pin such that you will be able to see the stitch you created when you stitched the pom-pom trim.  This will greatly help you sew later on. 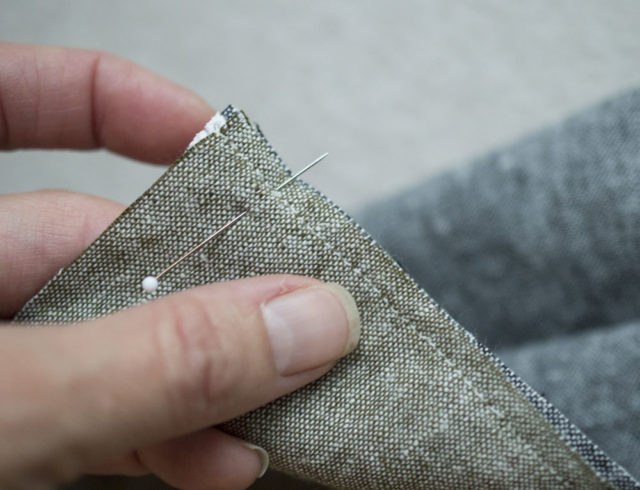 5. Sew along both long sides, still using the zipper foot, by sewing over the pom-pom stitch line, this ensure you don’t sew over any of your itty-bitty pom-poms.  DO NOT, however, sew the first 1/2″ and the last 1/2″ of the length, leave those un-sewn. 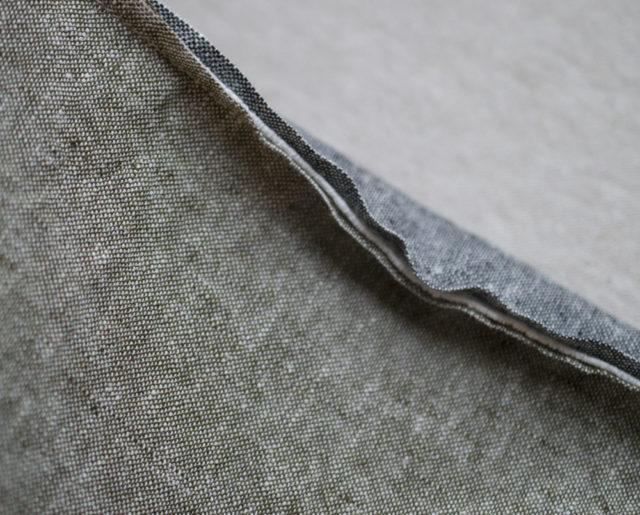 6. Pull the whole thing right sides out. You can press in place if you would like. 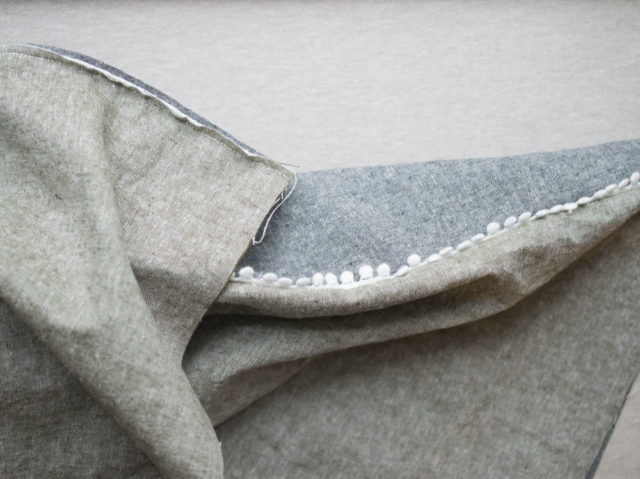 7. Along the short end, press back the black linen piece ( the linen without pom-poms) to get it out of your way.  Place, right sides together, the short end of the olive linen pieces with pom-pom trim.  You will want to use your standard sewing foot for this stitch so go ahead and remove your zipper foot. Pin in place and stitch, only though the olive linen, with a 3/8″ seam allowance. 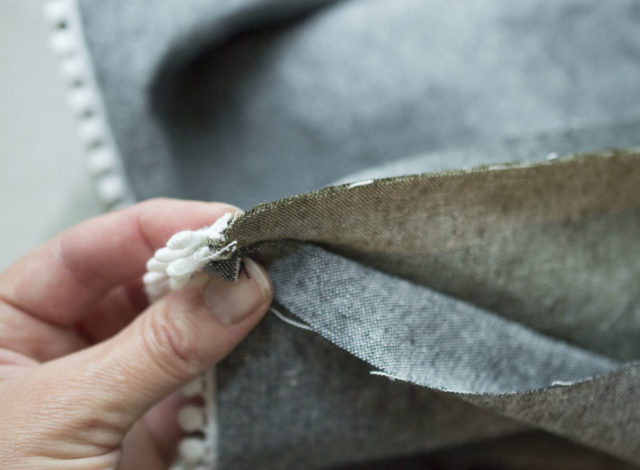 8. Press the seam and tuck it inside of the scarf.  Press a fold toward the wrong side on the black linen, so it fully covers the seam opening. 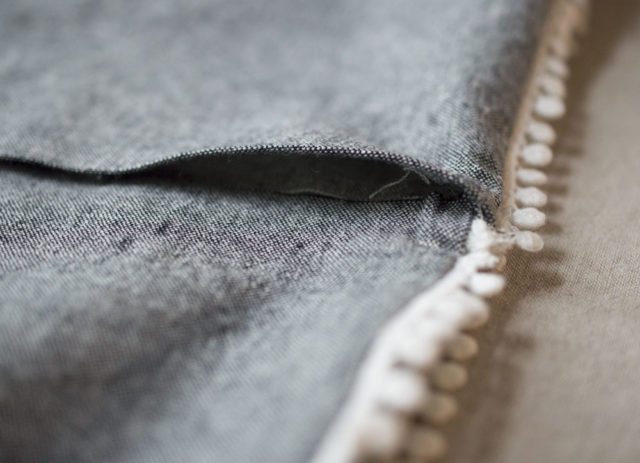 9. Pin together, only pinning the black linen to itself to prepare it for a slip-stitch closure. 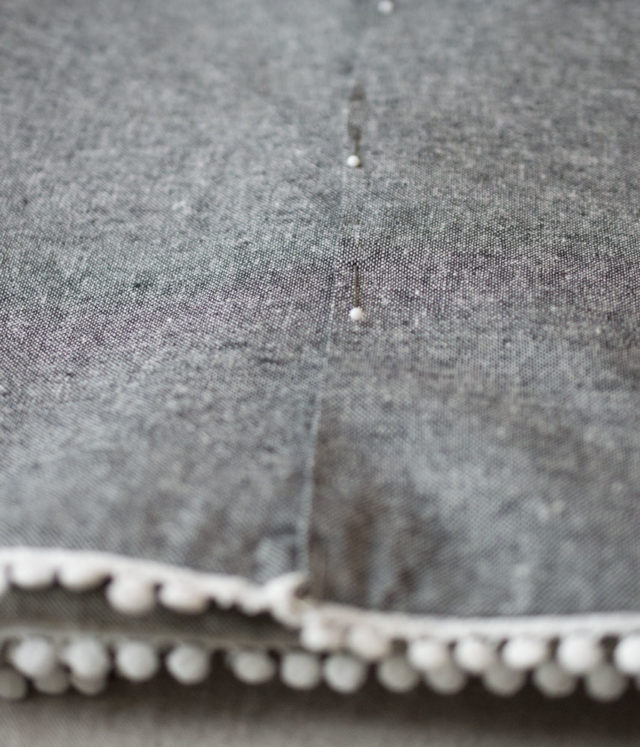 10. Prepare your hand-sewing needle and thread and fold the pinned black linen to be sure your olive linen side is out of the way.  Close up the opening with a basic ladder stitch (there is a good tutorial on the stitch here). 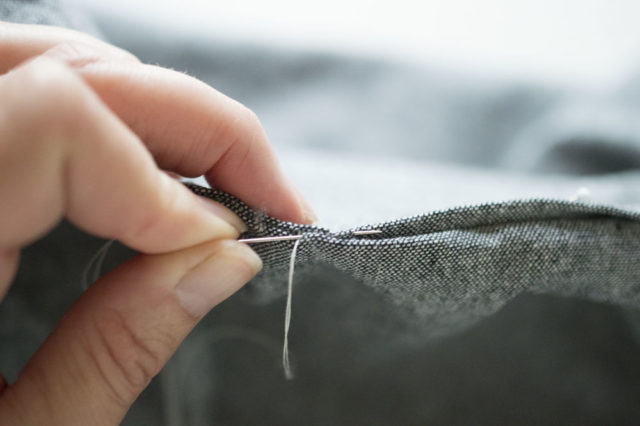 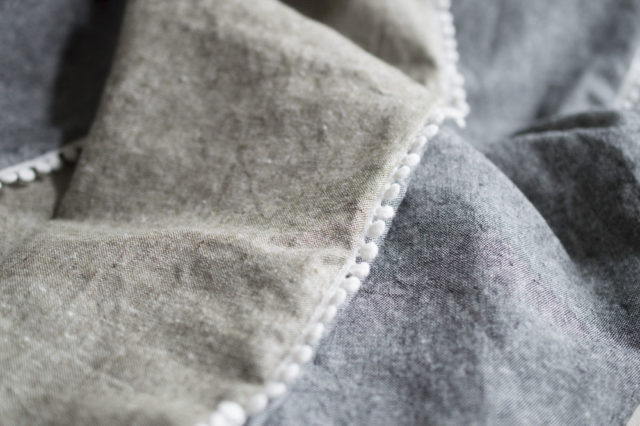 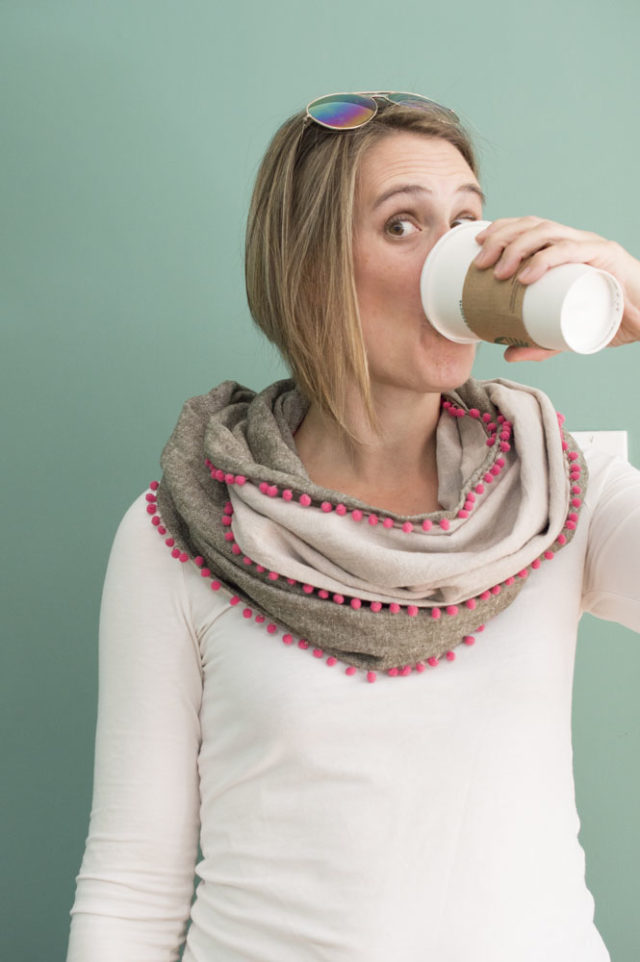 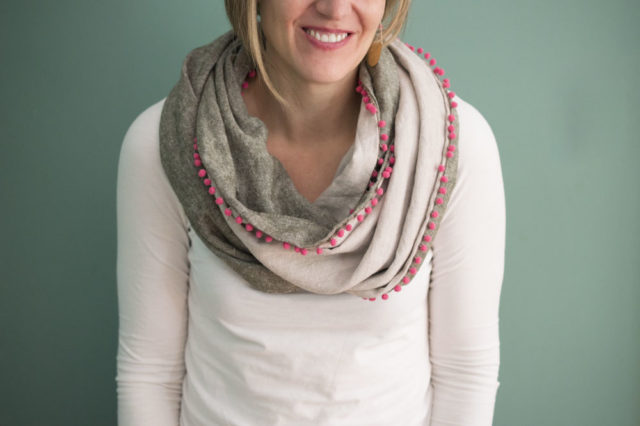 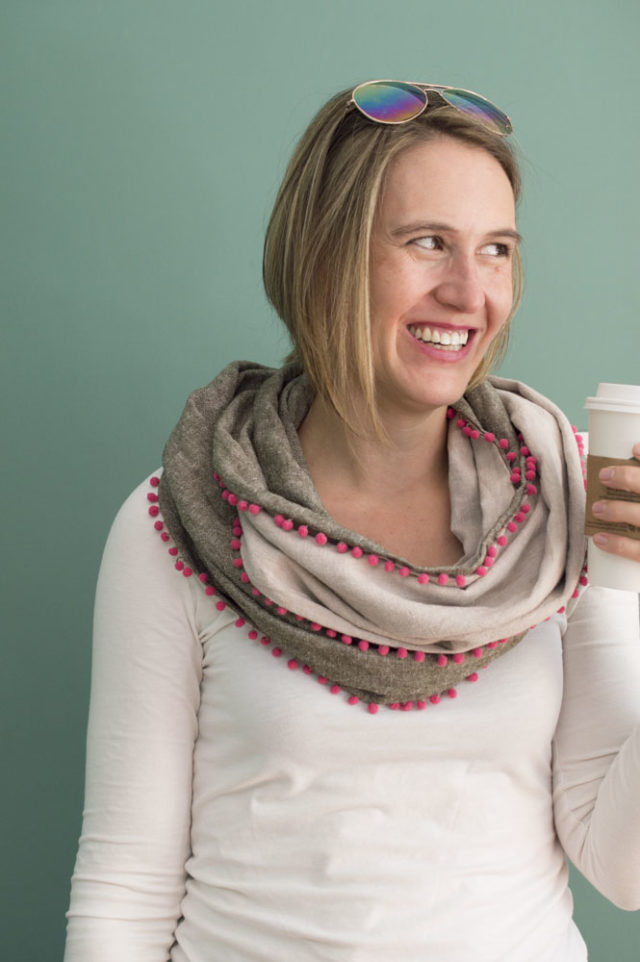