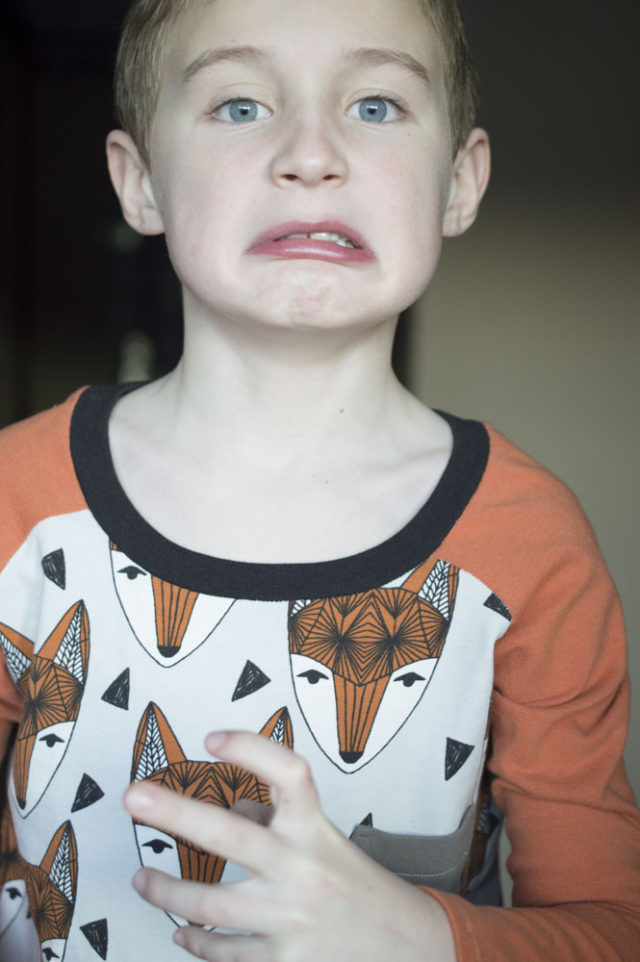 Oh, yeah. The wild boy got some new duds.  When I bought the fabric for the pajama tops I also nabbed this great fox fabric (from Emrose Fabrics).  I don’t often buy fabric just because I like it, but in this case I couldn’t resist.  And, as soon as J saw it he asked me for a shirt.  He asked me! I didn’t even have to beg him.  So, I decided to pair this fox tee with a pair of twisted trousers.

This kid. He’s a bundle of the best contradictions: wild and hilarious and soft-hearted and cuddly and definitely still the baby of the family. He’s started this thing of very nearly using a swear word but not quite.  He likes to draw out the word SSSHHIIIIRT. He gets away with a lot. Just look at this personality, it’s explosive and sweet in the same nanosecond. I paired the fox fabric with an orange ribbing, a black neckline and a tiny taupe pocket.  I was going for a Tea Collection type of look. I love their clothing style. The pattern is my same old standby that I always use, the raglan tee from Sewing For Boys.  The neckline did end up a bit wide but it’s also exaggerated in these pictures because he super stretched it out before putting it on.  For no good reason, you know…other than pure curiosity about how far it could stretch!

I also made the pants because I happened to have just enough of this denim-colored french terry and I know that the Twisted Trousers pattern (from Titchy Threads) fits him perfectly.  Of the half dozen pairs of twisted trousers he already has, most either don’t fit anymore or he wears them all the time.  Not surprisingly, he keeps wearing holes in his pants and he grows as fast as those slimy dinosaur things you toss in water. Sometimes it’s actually easier to make him a pair of sweats than it is to buy them, especially when all the stars align as they did in this case.  I made the waistband in a sporty striped jersey. 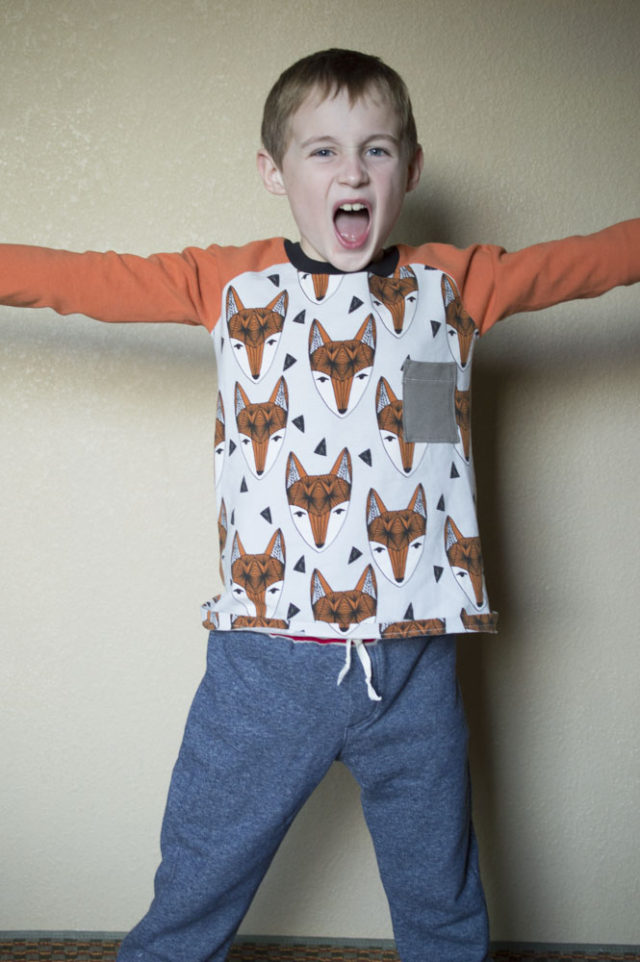 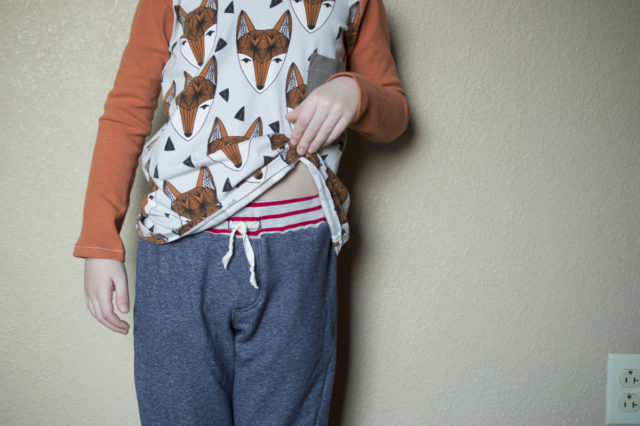 He loves his new outfit! He’s got the freedom of movement he needs and the cuddly goodness of fabulous fabric. It’s a mama-kiddo win! 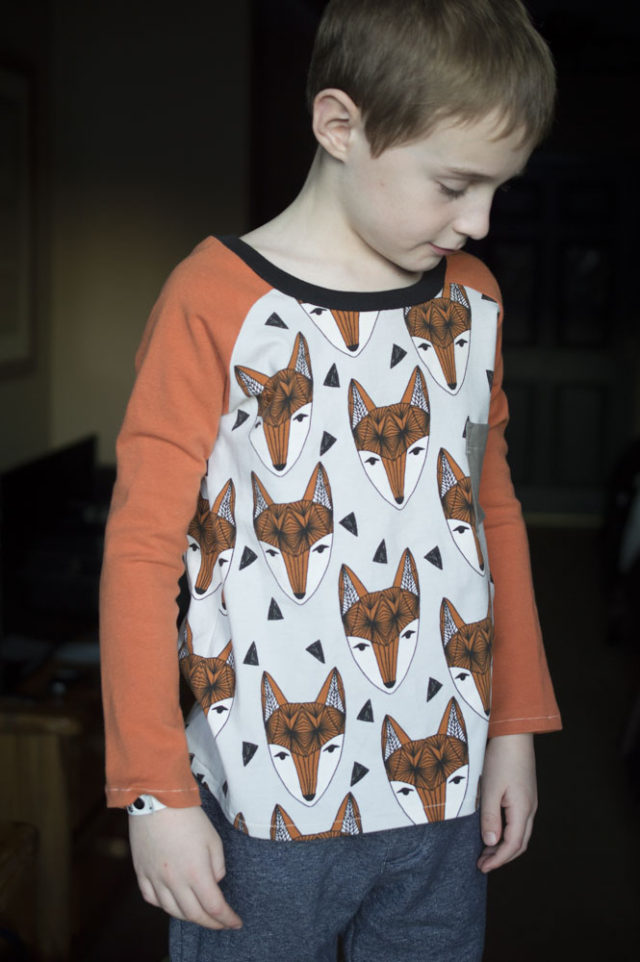 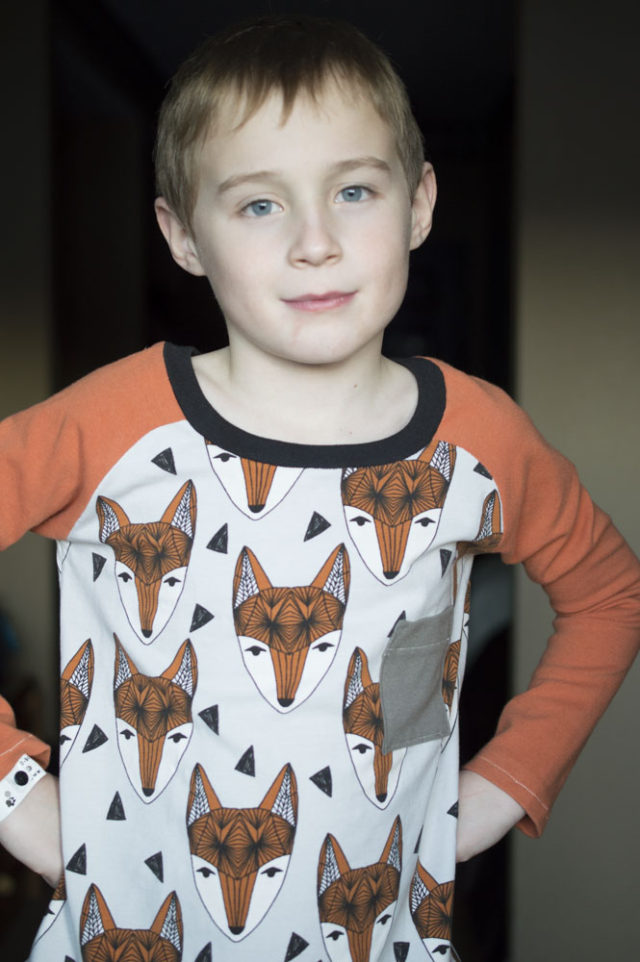