Have you ever had that thing happen when you pick up a book and you know immediately it is the book you are meant to be reading? You know you will follow every rule that book lays down and you will follow it to the letter.  You are going to devour this book.  You find yourself bringing up the book in totally unrelated conversations with friends and saying, “You should read this book.  It’s amazing.”   I’m there right now and the book is Make it Mighty Ugly: Exercises and Advice for Getting Creative Even When it Ain’t Pretty by Kim Werker. 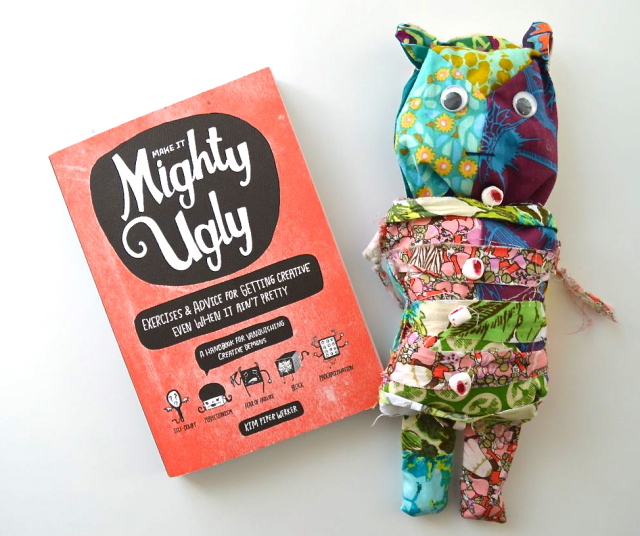 You should read it. It’s amazing!  For real, though.  Read it.

It speaks to creative ventures such as sewing and crochet, but the whole framework for thinking about creativity keeps coming to mind when I talk to friends who write for a living or run organizations or problem-solve with toddlers.  Anyone who has convinced a toddler to brush their teeth or wrangled words into exactly what their heart was trying to say understands everything involves creativity.   At the root of so many human endeavors is creativity and this book is here as a guide through the messy, uncomfortable, untidy spectacular mess of it all.

Also, it has helped me draw up a specific definition for the term badass but more on that later.  First, the book.  The overarching and powerful idea behind Make it Mighty Ugly is based on Kim’s personal experience with facing doubt and finding it freeing to make something ugly.  Not cute ugly.  Ugly ugly. To realize the fear of making something ugly by doing it on purpose.  She doesn’t believe in slaying demons, exactly.  It’s about recognizing them; naming them; examining them; giving them their due place in the creative process so we don’t have to fear them.  The analogy that stuck with the most was of the gut…the mix is good and bad bacteria.  We need bacteria for a healthy gut and we need our doubts and fears, they are the critics that help us do our best work.  The trick is to avoid letting them overrun the place, it’s about learning how to be the ones in charge.

Ugly is failure.  It’s shame. It’s doubt.
But ugly can make us mighty.  All we have to do is pay attention to it.  When we look at it, when we stare it right in the face, we take its power for our own.  We grow to understand it. We learn from it.  We defuse it.  We become free.

There are three main sections to the book.  First Kim discusses how to identify the fears/doubts/mean voices in our head.  She doesn’t hold back, either, it’s a full spotlight kind of thing.  In section two, she talks through some great exercises for getting creative and in section three she discusses how to build creative habits.  I chose to complete as much as possible as I read the book.

The first exercise, after an uncomfortable period of really examining all of the mean voices in my head, is to make something ugly.  I made Bruce.  This is him. 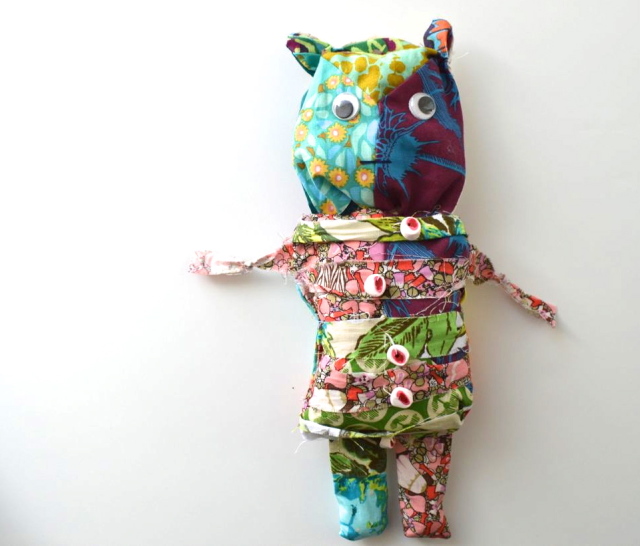 He’s got a lot going on. Truth be told, Bruce turned out a little cuter than I would have liked but never fear, he is a complete mess.  He is constructed almost entirely of bits and pieces of projects I previously started but that didn’t work out. He’s made of fabric I don’t like, in too many loud colors. (To be fair, some of the individual pieces are fabrics I love…just not together).  I took great joy in attaching buttons I made earlier this year didn’t turn out how I wanted.  I was so mad about those buttons…they look like pieces of stupid steak from a cartoon.  I put time into them and was so angry when the didn’t turn out.  As a result, it was with great joy that I slapped them on Bruce.  His arms are piddly bits of unfinished fabric that I simply tied in knots.  The seams on the back of Bruce’s head are exposed.  Nothing about Bruce is constructed properly and it was positively freeing to make such a shoddy wee man.  His google eyes make him semi-cute but don’t be fooled.  He’s a turd. 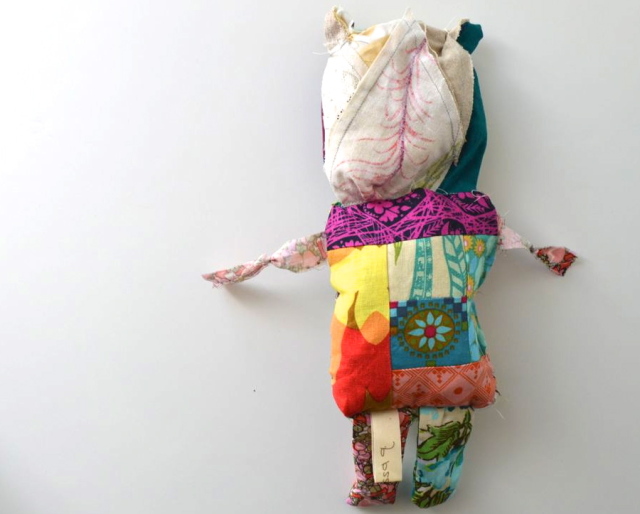 Let’s take an even closer look at Bruce.  Let’s discuss his personality.  In the course of making Bruce, I developed a full story line for this guy and now I talk directly to him when I’m struggling or doubting myself.  Bruce is a real piece of work and I’ve met him many times.

For starters, he’s relatively well meaning but not a great listener. He loves to dole out advice about how things should be done and he’s not got a curious or creative mind.  He’s rigid but not angry or mean.  He tells me with a thin smile, “This and that should always be done this way.  Things are supposed to happen in this linear fashion following these rules.”  Bruce squashes my joy with all of his shoulds/supposed to/always’s and me makes me feel like a hot air balloon just floating with no destination and no hope of ever touching land.  Silly, stupid and incompetent.  Frivolous and ridiculous. He is sometimes right and that makes me feel like I’m always in the wrong. Damn that Bruce. He’s probably in accounting. 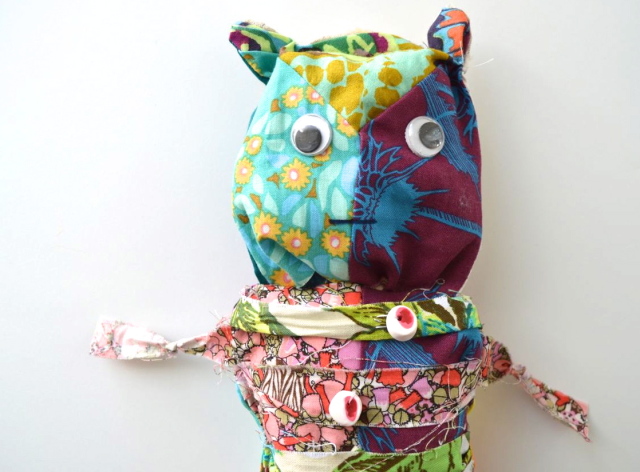 The thing I always want to tell Bruce (and I do try to tell him things!  The only trouble, though, is once he has his say he’s done listening.  He just tunes me out. With a smile. You know the type). I want to say, “Look Bruce! The view up here, on my hot air balloon, is positively breathtaking.  Thanks for your advice but, man, life your feet up off the ground every once in a while!”

The book is full of other little projects and one of them, making with cardboard tubes, turned into a week-long family affair.  J and I painted and constructed for days together.  Our project wasn’t aiming at anything in particular and our outcome wasn’t exactly pretty. 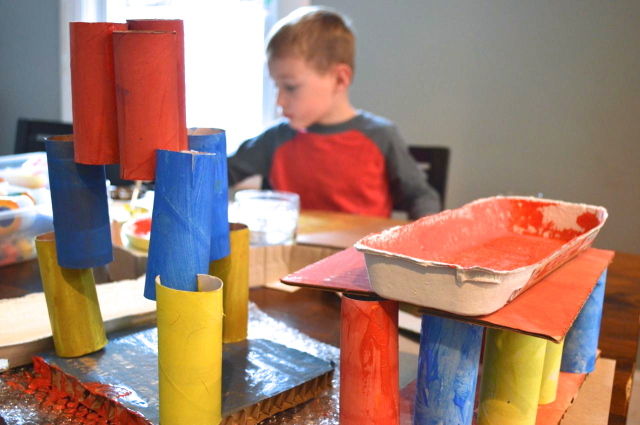 But it wasn’t ugly, either.  It was absorbing and soul-satisfying and creative and spectacularly pointless. 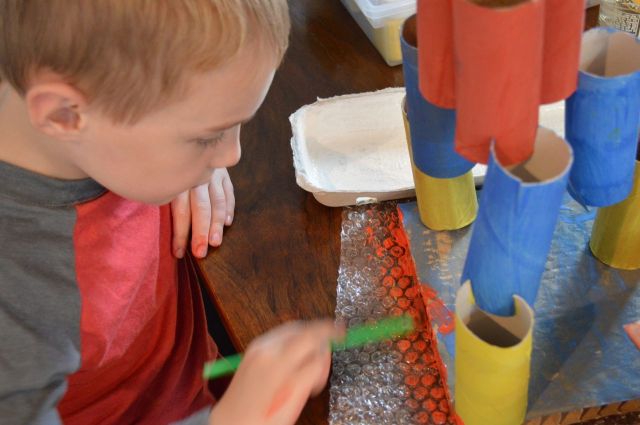 Bruce sits on a shelf in my studio now and we debate sometimes but I always win.  He’s my new sounding board.  Because, instead of pushing out the discouraging or doubt-filled voice, I air it, to Bruce. He tells me all the reasons why not and counter him.  With Bruce around I am a little more badass.  Badass, I discovered, means to have the doubts, to know the reasons why not and to still have the courage and vulnerability to make.  A badass hears the ugly voice and dives in anyway.  If Bruce is my ugly voice then Kim Werker is the kickass superhero by my side.

See? You do need to read this book!

To spur on your creativity, beginning sewers, remember all my patterns are on sale.  See this post for details and loads of free tutorials.  Go for it! Make stuff!

Disclosure: I was given this book by the publisher, Sasquatch, but they didn’t require me to blog about it. I’m writing about it because I love it and think it’s worth your hard earned money.  My opinion about this book, comes from the heart. I sincerely hope that is obvious.