Oh dear. I didn’t expect to be away from this space for over a week but it has been a while, hasn’t it? Thanks for all the kind words about my poison ivy, it has mostly cleared up.

It’s no excuse for my absence but we do have lots of exciting happenings at our house right now. The biggest is that we are heading on vacation to Ireland in a week! We leave the day  after school ends for C. (J is already done with preschool, which is lending itself to a real, true ‘summer’ feeling around here. He and I have already gone for pedicures, which are his favorite thing now.)

My husband’s extended family live in Ireland so we will be visiting lots of family in addition to the regular touristy stuff.  I think we all have that mix of insane excitement and mild trepidation that precedes a big trip.  It’s hard for us parents to get our heads around how our picky eaters will survive when faced with restricted food choices but surely we will be ok.  Right?  That aside, it’s our first international trip as a family of four and what better place to go to than the lush and green Ireland!  It’s going to be a true getaway.

We’ve also gone completely World Cup crazy.  Have you been watching the games? We are living and breathing World Cup 2014.  I’m not even a sports fan and I’m keeping track of who is playing who on every given day with genuine thrill about the whole event.  C & J both have these sticker albums that you fill with stickers of each player on every team, they get a pack of 7 stickers a day for an album with over 600 stickers…the albums fill sloooowly.  But, it’s all the boys want to talk about.  I was getting a little worried that they were too obsessive.  They are literally doing one of three things at any given moment: 1) watching one of the World Cup games, 2) pouring over their World Cup sticker albums and discussing teams or 3) playing soccer in the back yard for hours on end.  They have never slept so hard at the end of the day, their brains and bodies are facing pure exhaustion.  Parents are approaching me at the end of the school day to report their kids are coming home full of analysis of upcoming games, all information gleaned from my sons.  J wandered over to our neighbor’s house at 6:50 this morning to report yesterday’s scores in the USA game. Seriously, it’s obsessive.

I decided to stop worrying about future OCD and bring a little craft to the craziness.  So, on a quiet afternoon this weekend, I pulled some toilet paper rolls and egg crates out of a bin I keep in the basement and I cut out 24 little men in soccer uniforms.  My husband even helped make some of the faces because he is a great dad and great at drawing.  The plan was to make two soccer teams that the boys could decorate. 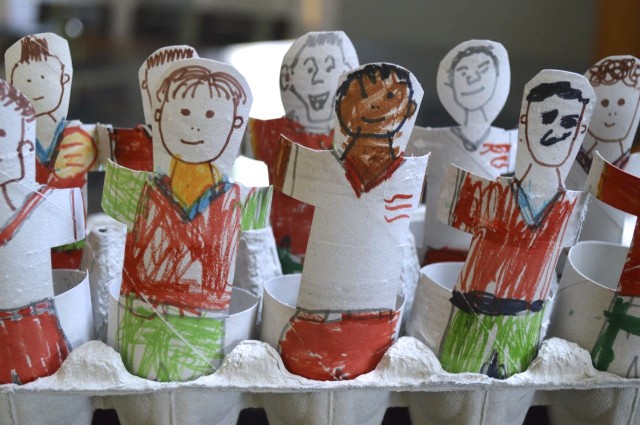 We didn’t finish all 24 players but we all sat down together and made some toilet roll men for a good hour or so.  Team jerseys were invented as were referee jerseys and goal keeper colors decided.  The boys got excited about making fans and using the egg cartons as bleachers and, well, the ideas were grand and involved but the interest waned early. 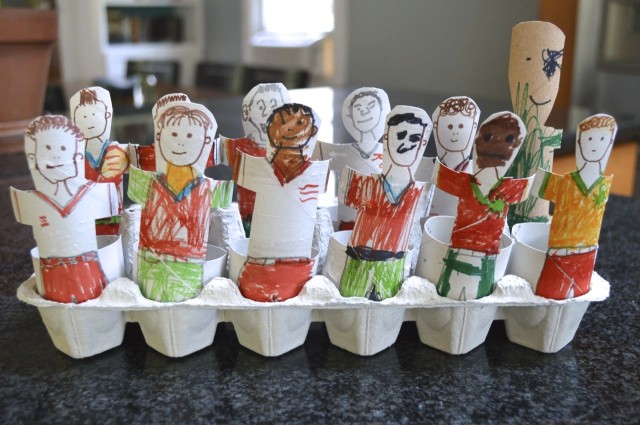 And wouldn’t you know, the next afternoon J was building a castle and our soccer men had been reinvented as knights protecting the castle.  Finally! A non-World Cup related activity!  Never would have guessed at that result.

I’m hoping to squeeze in a tiny bit of sewing in between teaching my last class, preparing for vacation, caring for J and everything else that needs doing around here.  I’ve also made lots of clothing lately and hope to find some time to share all of it here before we are off next week. That’s what our summer looks like! Why does it feel like it’s already over? Is there a name for that phenomenon? Over before it started, I guess.