Kid’s Clothes Week ( mostly called KCW to avoid marble-in-the-mouth syndrome)  is such a simple and encouraging idea.   Just one hour every day for a week spent sewing clothes for kids.  Run by Meg from Elsie Marley and Dorie from Tumbling Blocks, KCW happens every season of the year and hundreds participate. 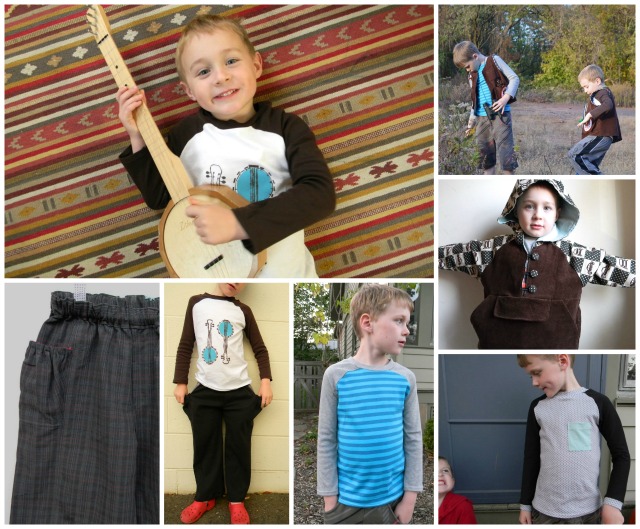 I’m so proud that I made everything on my list this time around (well, ok, there was one small change…instead of making two luka hoodies, I made one and added two extra raglan tees instead).  In total, two pairs of pocket treasure pants, four raglan tees, one luka hoodie, and two explorer vests.  That is a lot of stuff to add to our dresser drawers and closets.

I’ve participated in kid’s clothes week since 2011 and I don’t believe I have missed it since.  Over that time, I have discovered a few things about myself.

The process of simply signing up for a challenge like this really, really motivates me.  The week before I scour the internet for inspiration (particularly useful are the KCW Pinterest boards) and then I sit with my books, patterns and fabric and decide on what I want to make.  Often I prepare my patterns and set everything aside so it is ready to go when KCW starts up.

I intend to make kid’s clothes all the time BUT I DON’T!  Other priorities seem to always pop up and the idea of making clothing for my kid gets pushed to the sideline.  KCW is my time to focus and get it done.  It feels good to embark on a challenge knowing others around the world are doing the same thing.

Having a community of support, like the one that grows around KCW, is incredible and unusual.  The internet is not always my friend.  Lots of times, in fact, it makes me feel rotten.  Other people are making better things, more amazing things, winning awards or gaining untold recognition that seems so out of reach for little old me.  But, during KCW, I know that no matter what, I’m putting in some good effort.  When I talk about that on Facebook or Instagram, other KCWers usually respond with encouragement.  KCW isn’t a corporate-sponsored gig, it’s just a challenge, nobody is in it to win anything.  Nobody gets kicked out.  That builds a great sense of community.  I always get the feeling that people are rooting for me and I’m rooting for them.  And, sometimes what I make pops up on the official KCW blog and I feel like a full-on rockstar.

I have more time to sew kid’s clothes than I think I do.  The KCW rule is to work on kid’s clothes for at least one hour a day.  Officially.  But, I really don’t operate like that.  Sometimes I intend to keep it to an hour but once I get sewing I just want to keep going.   I want to finish and I’m a pretty slow sewist, one hour really just isn’t all that much time for me.  Plus, I want to see how it looks when ‘it’ is done.   So, I keep working until I finish.  If I can’t finish during the day I map out ways to work on it at night.  Surprisingly, I get a lot of sewing done during one week.

Relatedly, I don’t have a great sense of balance during KCW week.  That is my diplomatic way of saying that I pretty much let the house go to hell.  Laundry did get done last week but only the essentials.  Many days the kids after-school snack was a box of crackers left out on the kitchen table.  My instructions were “eat however many crackers you want, if you need me I’m upstairs sewing.”  I recognize the irony of neglecting my children while I sew handmade clothes for them.  I rationalize my behavior by insisting that kids need unstructured time and now they are getting it…but I definitely overuse that excuse during KCW.

I need to mix things up.  I want the satisfaction of finishing, as I said earlier, but I also want to learn something with each new KCW.  I want to stretch my skills.  In previous challenges, I’ve decided to use KCW as an opportunity to improve my ability to sew with knits and this time I tackled the Luka Hoodie.  I’m so thankful for both opportunities!  Children’s clothing is a great place to start if you are thinking about taking on a new sewing skill.  The fabric needed is usually less than with other garments and most likely, the item will fit and look cute because kids always look cute and a good fit is easier on children’s bodies…young kids have, literally, no curves! 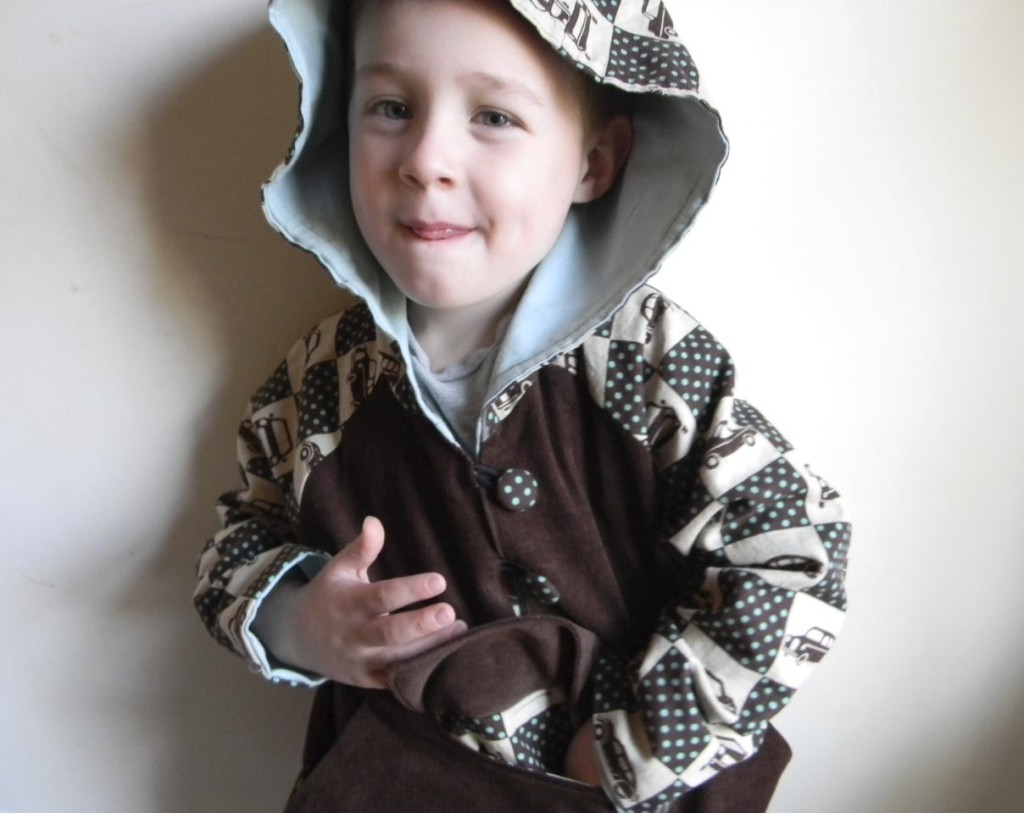 KCW takes the over-thinking out of it.  Sometimes the biggest roadblock I face to beginning a project is about all the decisions.  Decisions about pattern, fabric and timing?  Should I make that shirt now? Or wait? Should I use that echino fabric I’ve been saving or is it possible an even better project will come along someday and I will wish I had saved it?  Is it better for me to use my time making something else?  Should I? What if?  Could be?  Ahhh!!  I can think my way around the planet and end up going nowhere.  KCW takes the decision-making out of it.  It’s KCW, it’s the time to make kid’s clothes.  Do it, Melissa! Use what is in your stash and get it done.  That is what the week is about.  Stop thinking. Start making.

Once I get rolling I don’t want to stop.  I love it when my kids love what I have made them and I love making special things for them.  I really appreciate the chance to share with them what is such a driving passion in my life.  Strangely, however, that is almost a side benefit to everything I get from KCW.

Did you sew anything for Kid’s Clothes Week?  Did you make everything you wanted to?  Crank out lots of stuff or pace yourself and slowly make something special?  Did you go for Halloween costumes?  Or everyday clothes? What did you learn?

Did you watch along and gain inspiration?  Are you tempted to join in? Anything holding you back?