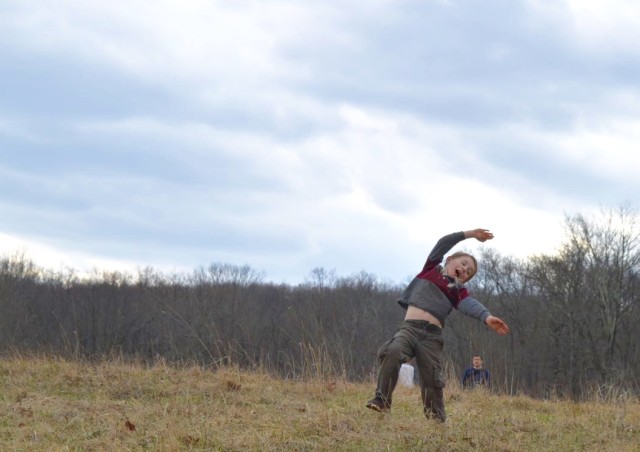 It’s been pretty quiet around the blog for the last week and a half!  My apologies about that. The boys had their spring break last week and after much debate we decided to try our first stay-catation.  This decision was made, mostly based on the sad state of our bank account after our cat’s surgery.  Um, cat surgery is pricy.  Super pricy.  You have no idea, unless you do and then you can relate. It’s a good thing we love her so much. 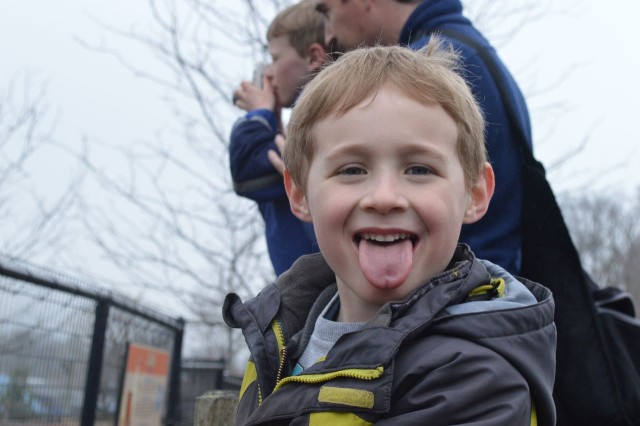 We took the week to be together; no work, no travel and no elaborate plans.  I will admit that I was worried. I was convinced that the house vortex of laundry/cleaning/dishes/gardening would suck me in and I would just end up cleaning up after people for a week. I was certain that staying in the house = working on the house.

But, guys, I’m so proud to announce that didn’t happen!  I avoided the vortex! It is possible! The stay-cation is a real thing. We took day trips (almost) every day and slowly found our way to a lovely rhythm of part adventure/ part relaxation and (almost) 100% togetherness. 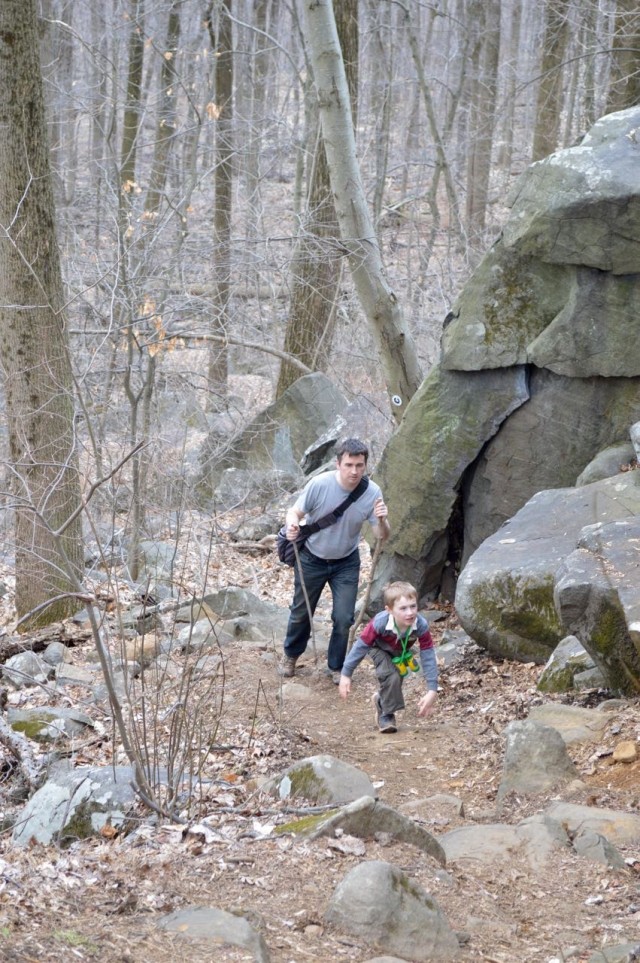 We tried to get outside every day on little adventures and with the funny weather that meant we wore both tank tops and winter coats depending on the day. We started out the week with a hike around the Sourland Mountain Preserve in southern Jersey.  It’s an area covered with boulders and a pretty steep climb (for little legs) to reach a great view. 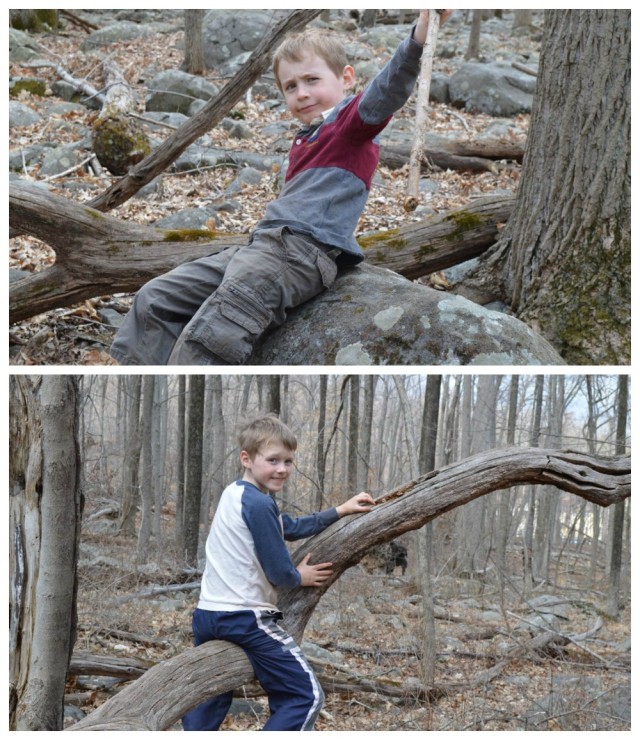 Both C & J like being outside and love to explore so we let them go off-trail.  It leads to a lot more natural discoveries and engagement with the environment.  We sometimes get mean looks from the hard-core hikers.  I understand those mean looks.  I appreciate that sometimes trails are marked out for a good reason but I’m a firm believer that by going off-trail my kids learn and appreciate more about nature than they would by being restricted to the trail.  (I’m a big fan of this landmark book by Richard Louv).  Plus, they have so much more fun! 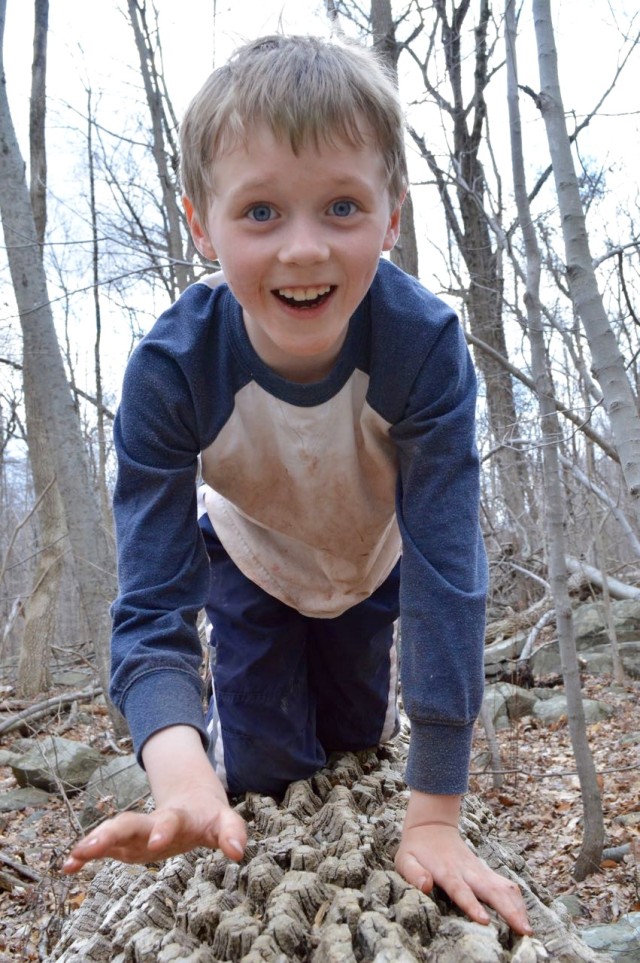 We also made it to Sandy Hook, an ocean-side national park, to explore the beach.  I’m actually a bigger fan of the beach in the off-season than any other time. So much more exploring, so much more quiet.  It’s my favorite. 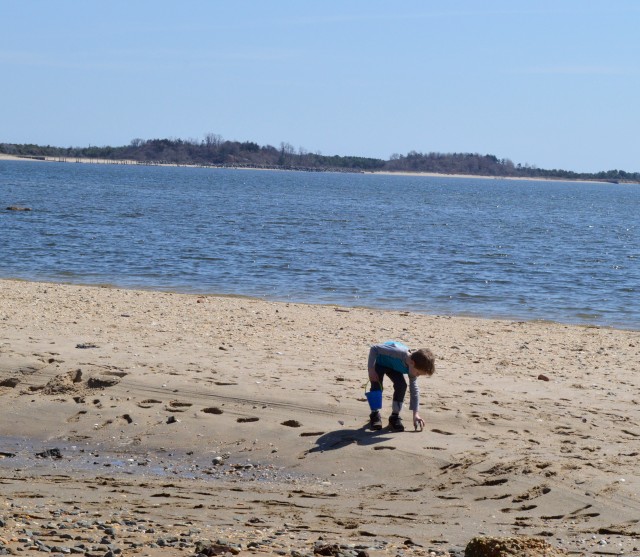 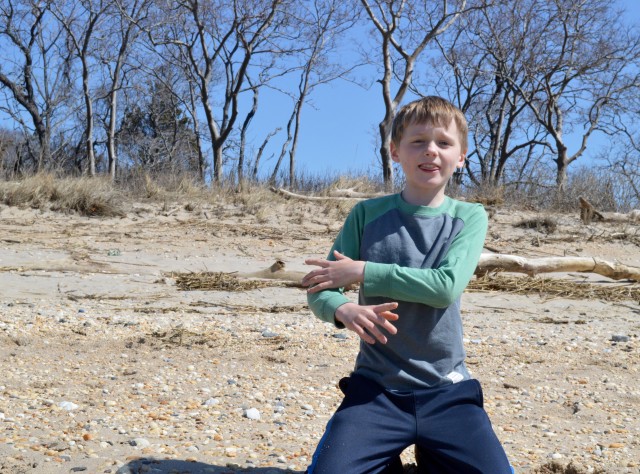 With sand still in our hair, we headed to the Pocono Mountains.   A ski-resort there offers a mountain coaster ride as well as an Adventure and Zipline course.  This was our biggest splurge day. The boys loved the mountain coaster, though I was totally terrified. Seriously. Terrified.  The boys were eager to try the zipline course and got loaded up with mountaineering equipment; carabiners and zipline trolleys. We had an amazing guide helping us and went in with great enthusiasm. Turns out, however, that they weren’t really ready to hang twelve feet in the air walking on wires.  C was really eager and really skilled at operating the carabiners, which were actually pretty complicated. He picked it up pretty quick and started along on the course with me below him on the ground.  But the cold air was hard on his hands (you know, cold bare holding a wire!) and sometimes it was hard for him to reach when he needed to switch his carabiner from one wire to another.  It looked pretty precarious to me and felt really uneasy for him. 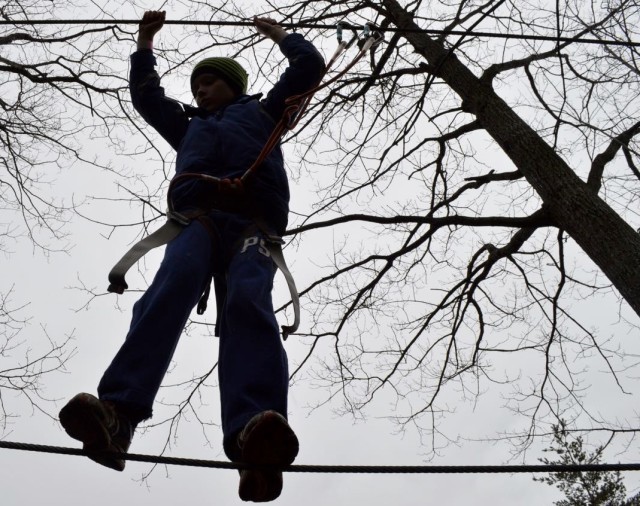 He decided he wanted to get down and I didn’t fight him.  I’m not into forcing my kids; more into being brave enough to let go and follow them. It’s not always easy but, if anything, I want them to learn they can trust themselves.  Trust themselves to be bold and also teach them they can have faith in the inner voice that says it’s time to back down.  Both are ok and both take courage. 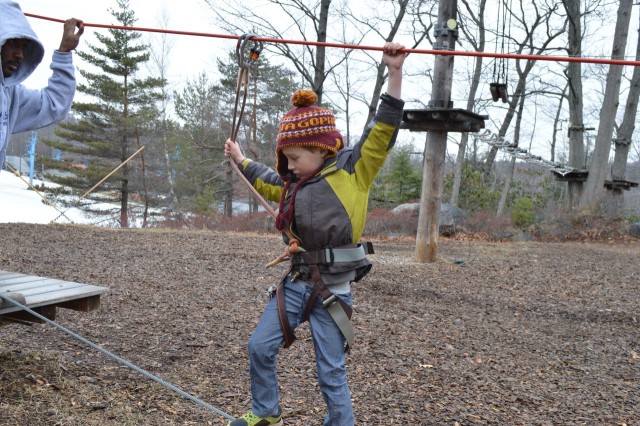 For J, the carabiners were really difficult to operate and despite passing the height test, he wasn’t able to reach the top cord with his feet on the bottom wire.  He figured out a way to navigate the pre-course but wouldn’t be able to do that adaptation on the real course.  In the end, both boys were frustrated, disappointed and a little embarrassed.  Despite our best efforts and a flurry of reminders that they should be proud they even tried, they were feeling pretty bummed. By this time, we were hungry and all of us had cold, wet feet and hands.  After one more ride down the mountain coaster we left.  We ended up driving down the road to an outlet mall, where we bought warm, new socks and staked out a place in the food court.  Of all places for our outdoor adventure to end, that food court was perfect.  Over hotdogs and bad Chinese food, we warmed up, talked and laughed like crazy over our Mad Libs (our new thing). 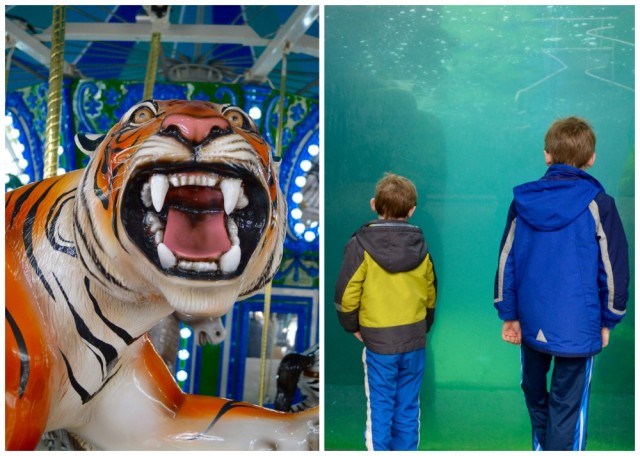 Later in the week, we went to the zoo, read books and went the movies. C brought his little Insta camera to the zoo and took pictures of the animals that he later turned into an animal book.  I love seeing him walk around with a creative mission.  He’s not so interested in painting, coloring or other obvious art projects but he’s really exceptional at making up his own projects.  It’s so fun to watch.  I have lots to learn from him. 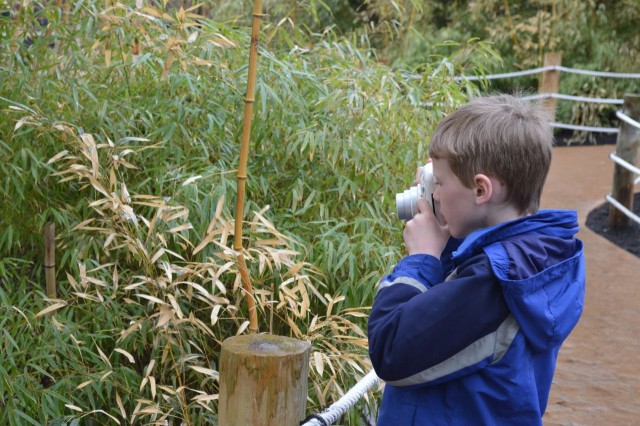 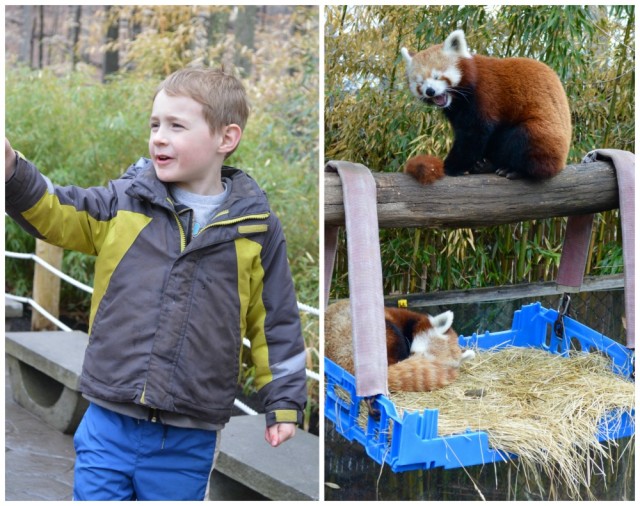 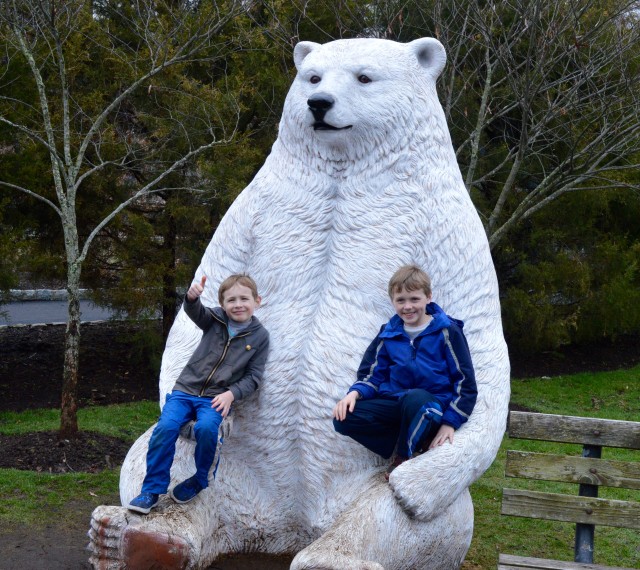 We even painted a few rooms, which I don’t technically count as house vortex-ish because it’s so much more fun than laundry/dishes/cleaning.  By the way, we did end up going with grey for our living room! Thanks to everyone who voted, the world really loves grey! So do we now.

That was that, a little here and a little there and our week ended happily and connected.  Stay-cation success!

+ We read the graphic novel Oz: Ozma of Oz

(affiliate link) by Frank Baum, adapted and illustrated by Eric Shanower and it was amazing! It’s the full series of Oz books adapted into graphic novels that are vivid and colorful and so interesting.  The main character is Dorothy (duh) but she’s such a strong, brave protagonist and the stories are much richer than what’s in the movie.  I’m so psyched we found them. The boys and I were gripped by this amazing graphic novel.  We picked it up at our local comic book store and can’t wait to read the rest of the series.  It was fantastic.

+ Kid’s Clothes Week starts next week!  I have no idea how I’m going to fit it in but I’m really hoping I can.  The theme is Wild Things and that is just too good to miss. Giveaways are happening all week long.  You joining in?  I have a vision of octopus pants…not sure if it will happen.

+ Indiesew is giving away free patterns all year for one winner.  Enter and then cross your fingers with me.  How awesome would it be to win?!