I get most of my ideas for the sewing classes from the community of people that take them, people otherwise known as my friends.  it’s a great feedback loop because then I get to see more of them!

often there is a suggestion for a class that is a super great idea but something I have never made.  that’s when I head to the drawing board and hunt around for the right book/ existing pattern or draft my own pattern.  a process that involves lots and lots of making and tweaking.  it was exactly this road I went down for the messenger bag class. 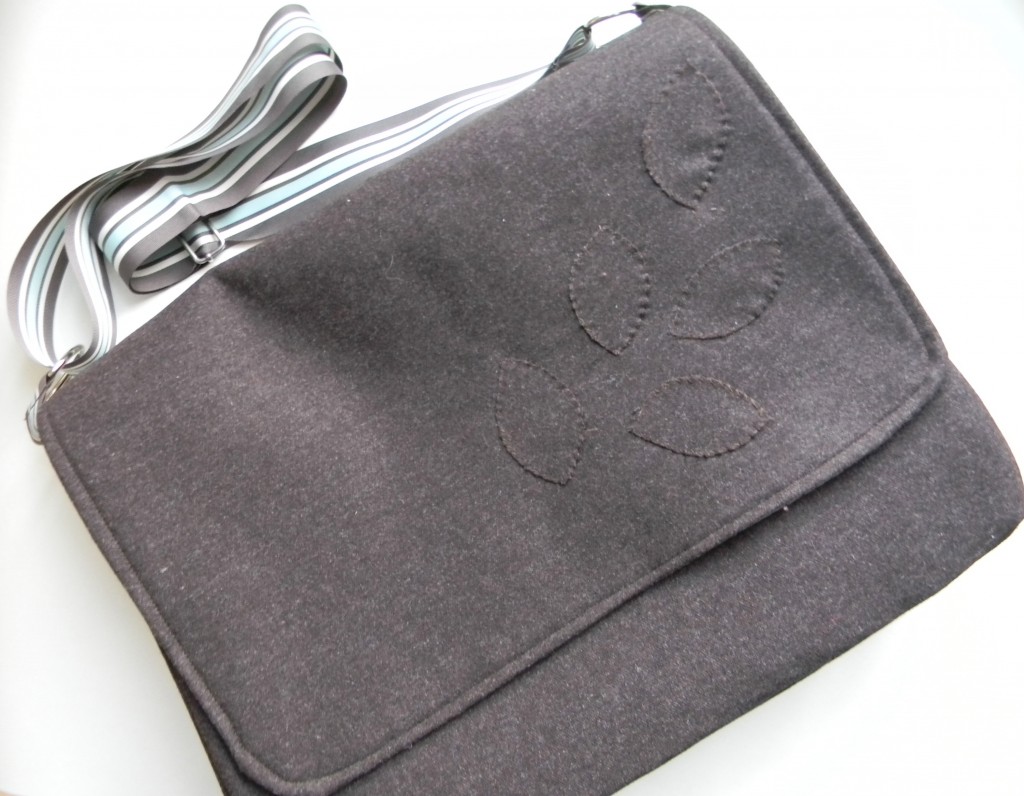 it’s a pretty fun process, actually.  a bit of a puzzle.  but it can be a balancing act.  I want to keep the cost of class supplies at a minimum so I have to be aware of the cost of a book and pattern but I want it to be simple and high-quality at the same time.  I also don’t want to bust my own budget purchasing too many new books and patterns attempting failed trial runs and, consequently, use up too much fabric with the process of making prototypes.  In this case, I ended up drafting a pattern that I’m really excited about.  but that is not where the story begins. 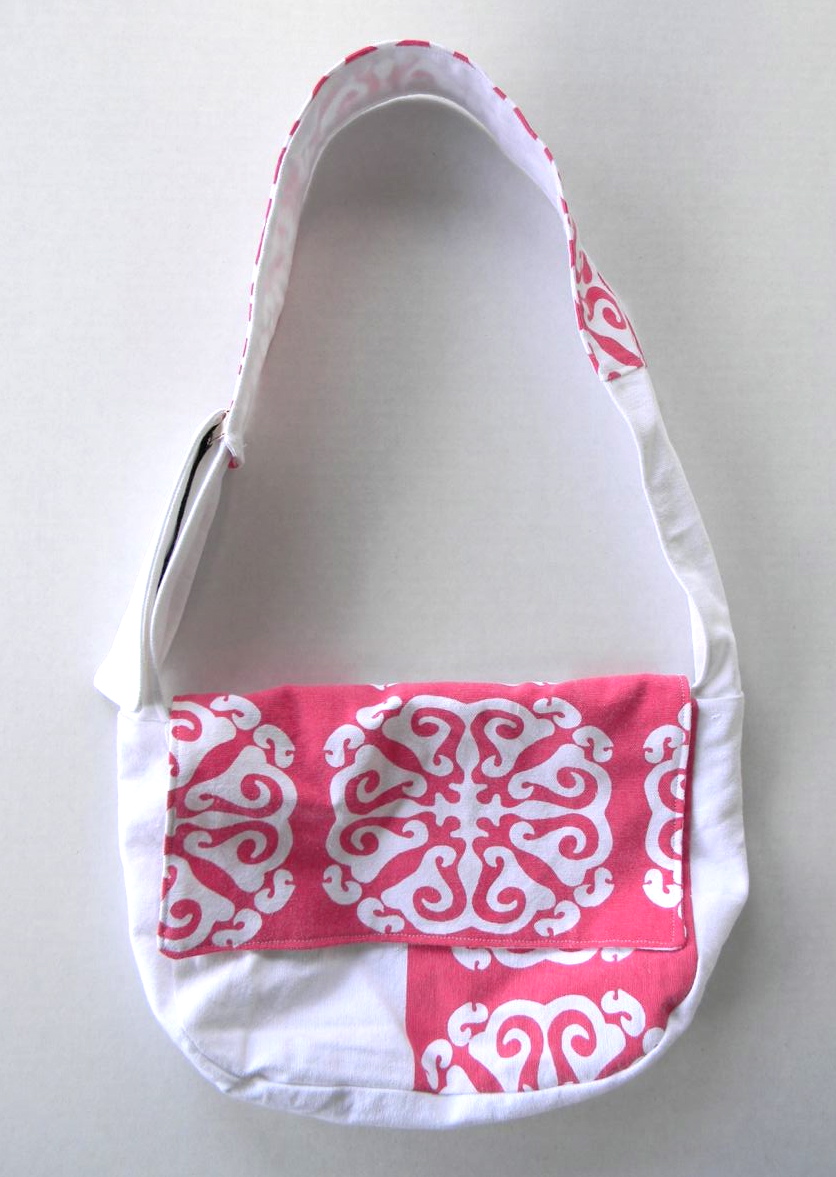 it starts with this child’s messenger bag from the meg mcelwee book growing up sew liberated.  I made it with some fabric salvaged from an old shower curtain and while it turned out cute I worried that it look too much like a purse.  [as an aside, I am totally in love with meg.  I’m taking her craftsy class and she is so funny and warm and she doesn’t know it but I secretly think of her as one of my best friends.  it’s not creepy-like, I don’t think.]

anyway, on to the next! 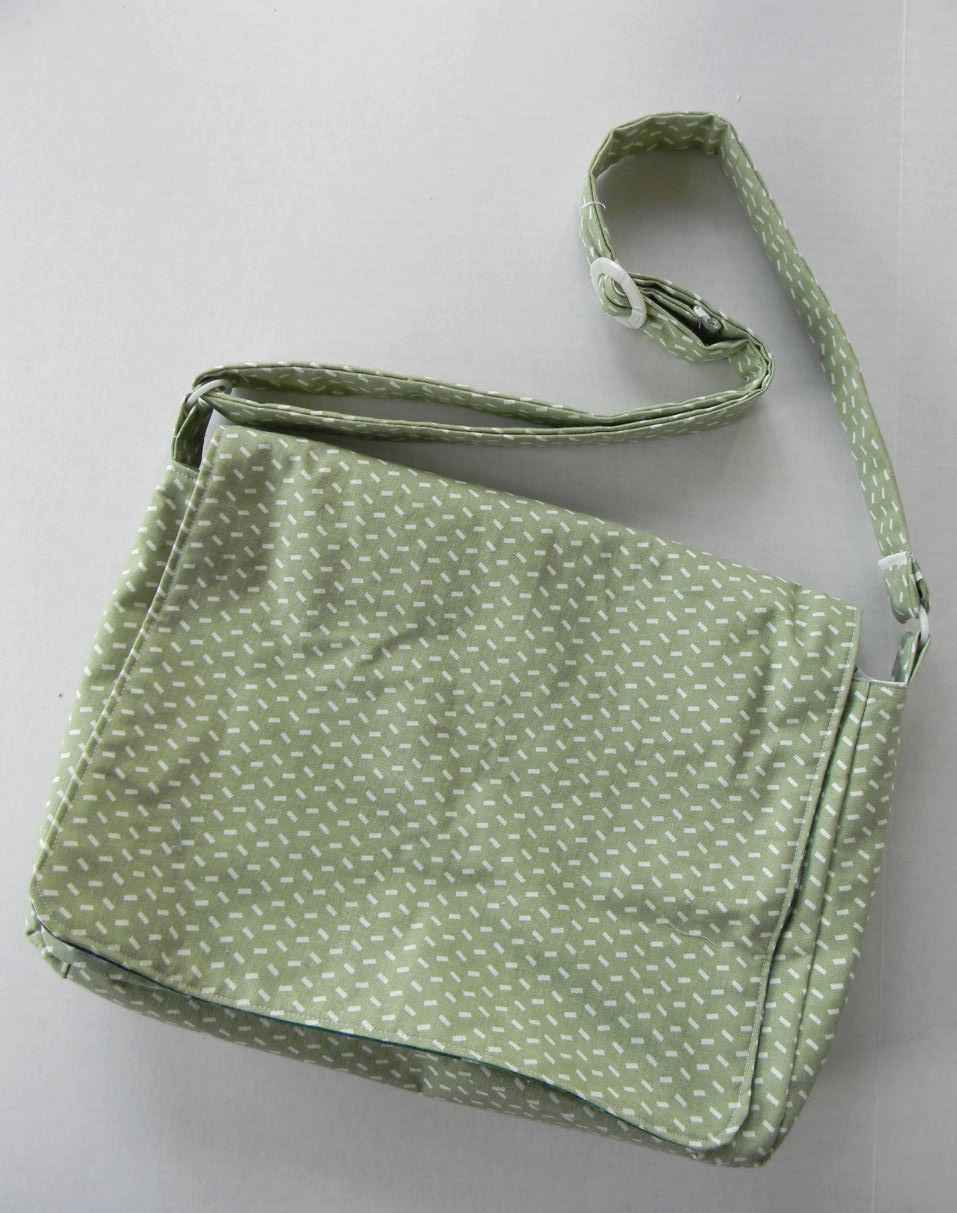 this time I switched gears to adult messenger bags.  I tried out the messenger bag from the book carry me (which is filled with wonderful, inspiring bags but be forewarned, the instructional language is pretty slim and tough to follow as a result of being translated from japanese, I guess).  I liked the look of this bag but it was really time consuming to make and way too floppy.  so, I went to the other extreme. 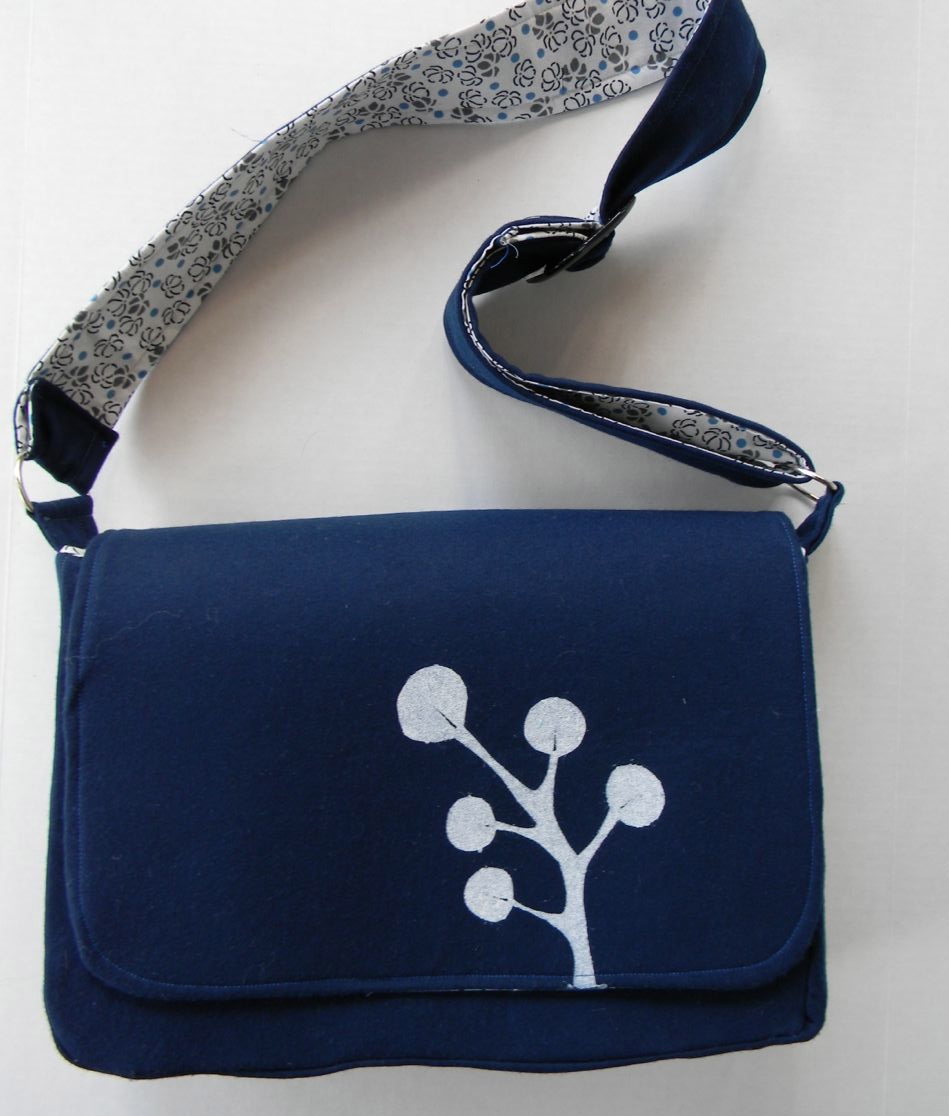 this somewhat lovely looking bag was a serious wrestling match…and the bag won.  I lined it with thick heavyweight interfacing which ended up making it nearly impossible to maneuver while sewing.   it actually slammed me in the face once.  the stitches came out uneven in parts because of all the wrestling (you can tell by looking at the bottom of the bag) and the final product was a stupidly stiff bag.  don’t ask me why I took the time to hand-stencil the front of a bag that I don’t really like, sometimes I just can’t say no when inspiration strikes…[meg understands].

finally, I took what I learned from every other attempt and drafted my own bag pattern and came up with this: 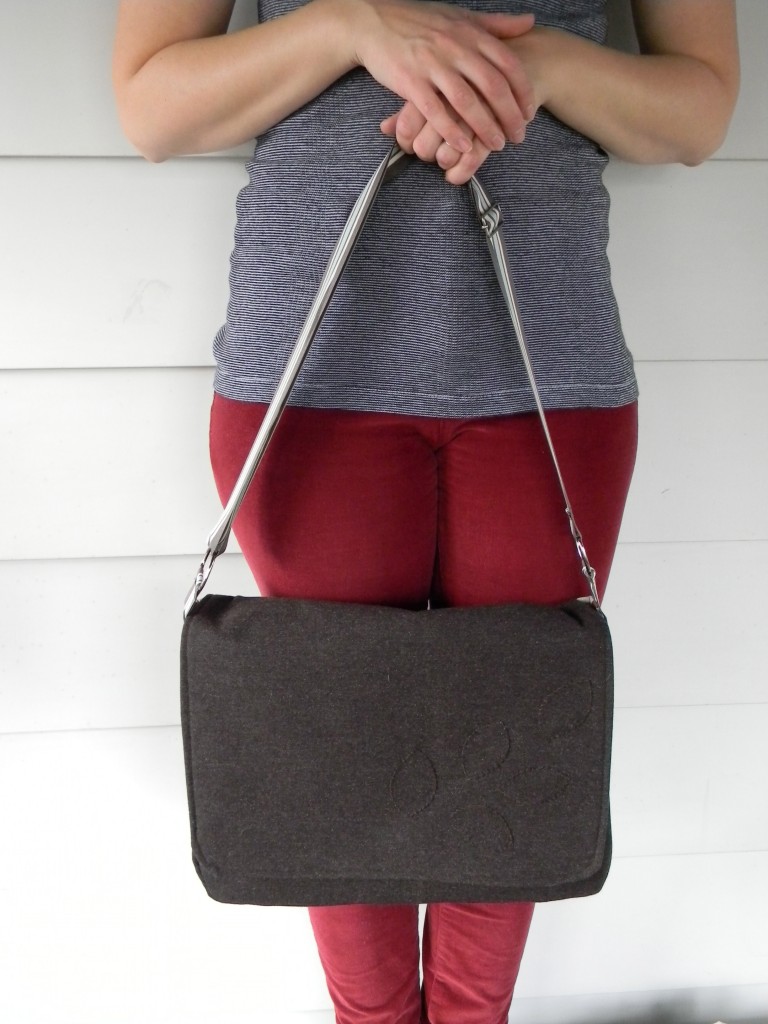 it uses a mix of light, medium and heavyweight interfacing and a straightforward method of construction.  It has a gusseted pocket on the inside because bags need pockets and I added a more subtle embellishment to the front of the bag. 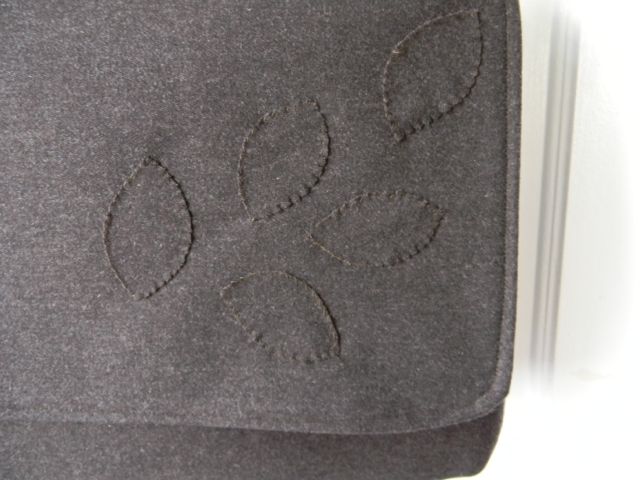 I used some of the fantastic wool that I got from my grandmother and inside is linen from Ikea. 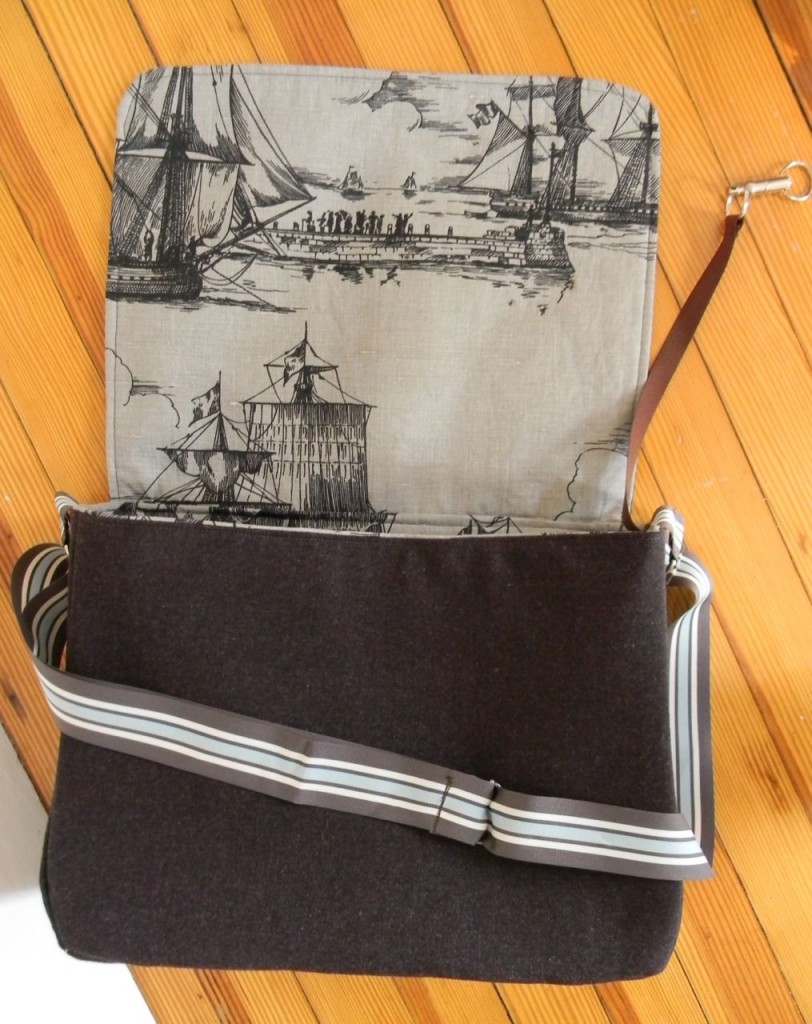 as always, there remain additional things I will change when I make this bag again such as  simplifying the strap, using thicker webbing and canvas fabric.   but, those lingering ideas and tweaks are what keep things interesting.  for the most part, another puzzle is solved!