this summer we did a few art projects that the boys really loved and I haven’t yet blogged about them so I thought I would.  this one—design your own t-shirt—was a huge success.    I got the idea from pinterest and this post.  the project calls for fine sandpaper, crayons, and a t-shirt with some degree of synthetic fiber mixed with the cotton.  most t-shirts are a mix anyway.  we bought the sandpaper and the t-shirts at the dollar store.  we happened to have fabric crayons so I used those, but they said regular crayons would work just as well.

[the reason that we happen to have fabric crayons is that if I see something that looks interesting (and by interesting I mean ‘in a crafty way’) I will buy it and cart it around with me for ages.  I have no idea how long I have had these fabric crayons but I do know they have survived at least one move…so over 8 years.  I will purge a lot of things but not craft supplies.] 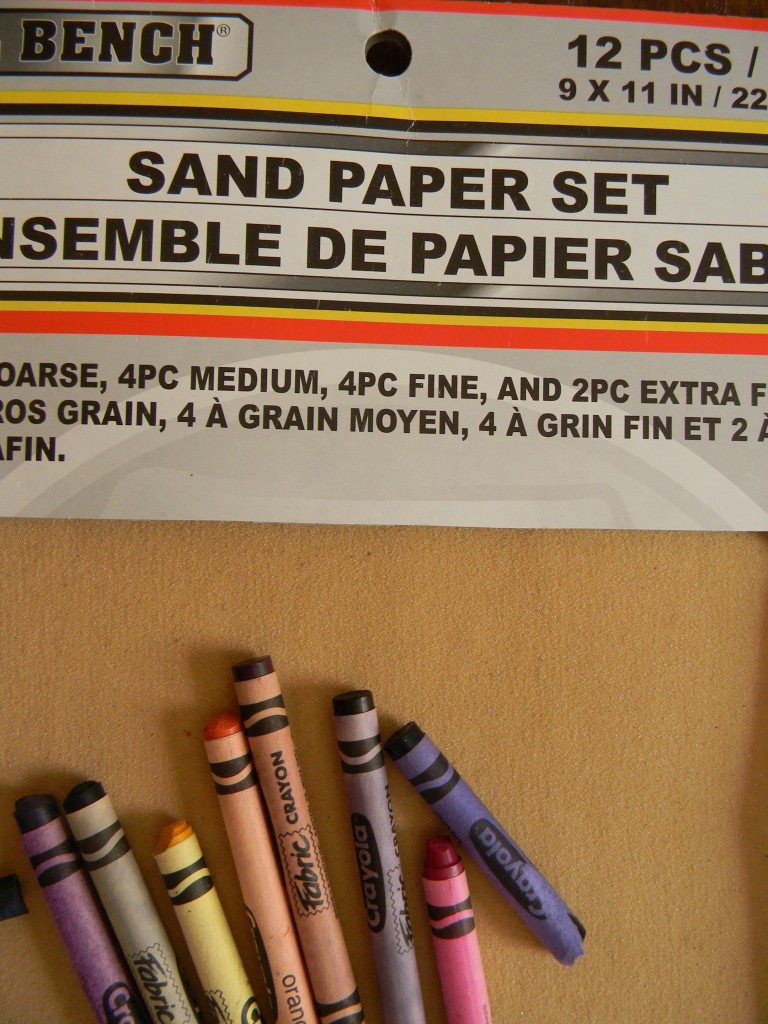 back to the tees.  the technique is really simple.  the boys drew their designs onto fine sandpaper so that the wax of the crayons would really scrape off onto the sandpaper.  we also had to remember that any words needed to be written backwards because the image is flipped over to transfer it onto the t-shirt.  C wanted some words on his tee so  I wrote down what he wanted on a piece of paper backwards for reference.  I also reminded both boys to draw really hard because the image needs to be very strong to transfer effectively.

the sandpaper drawing is then placed, image side down, onto the front of the t-shirt and I put a piece of paper in between the two sides of the tee, just in case it leaked through.  with the iron at the cotton setting I pressed the iron down and held it for a good 10 seconds, then lifted it and did the same thing to cover the entire image…be sure to lift and press rather than move the iron along the surface of the image because that could blur it.  you can tell when the image has transferred onto the fabric because it starts to leak through the back of the sandpaper. and here is how they turned out: C, our resident artist, drew a man whose whole body is an eyeball and is named milo (he also needed to sign his artwork so the arrow is to show which one is named milo! I know! so cute.)  J, who is definitely more of a truck man, joined in the fun with some scribbles.  they are both mad about these shirts.  as in bouncing off the walls crazy about them. so, I proceeded to dig up some plain white placements (see above note about the purchase of any and all craft supplies) and C made a placemat for each family members except for papa who was delegated to me.  my placemat featured a woman who is basically just a belly with legs…I am working on not taking it personally.  there was also a guy playing banjo in a tent and a kid next to a rainbow.  I made papa some stars and what turned out to be a backwards moon.  in my defense, I was pretty focused on making sure nobody bumped into the hot iron but it was still not my most creative work. around the time of these t-shirts I was, in truth, prepared to write off the whole ‘project’ thing altogether.  over the summer I felt like I planned lots of activities that took 30 or even 40 minutes to set up and clean up but only occupied their time for 5.  then C got really earnest about his future (yes, at 5 years old) and was in a serious quandary about whether he should become an artist or not.  so, I declared it “art week” and we did an art activity every day that week, starting with these t-shirts.  and something amazing came out of it.  just by declaring it “art week” it gave each day a purpose.  the boys were telling strangers at the grocery store “it’s art week at our house!”.  everything un-fun that we did during the day was a little more tolerable because later we were going to have an art project.  and C took each project so seriously.  I followed his cue and did the same (I promise to share them all).  I even declared the next week “truck week” just to throw a bone to little J who loves trucks to no end.  I was reminded, once again, of how much these two boys love a good solid routine.