before we were married, my husband and I spent a handful of months living out of his parents house in england.  we were traveling around without jobs and, as a result, we were broke. we rarely indulged in an evening at a restaurant.  but, one day I was overtaken with a longing for the kind of leisurely, lively dinner that only happens in a restaurant while you are on vacation.  so, I suggested that we find a cheap mexican restaurant and join the fray.  my husband cocked his head and informed me that we were in england, there are no mexican restaurants only indian ones.  and suddenly and completely involuntarily I needed mexican food more than I have ever needed it before. I mean, please?! I grew up in Minnesota and we have mexican food! I had never really thought about how proximity to mexico was the reason there was widespread mexican food in my country.  I became desperate. I dreamt of cheesy enchiladas and bean-filled tacos for weeks while continuing to argue about how ridiculous it was that england had not caught on to the whole mexican food thing.

and, bluegrass music is exactly the same.  well, maybe not exactly the same but pretty darn close.  see, new jersey is kind of a rock/jazz/punk sort of place.  not that there is no bluegrass (I’m sure I could find it if I were really seeking it out) but opportunities to see folks/bluegrass music are pretty slim. town festivals and parades feature heavy rockers and coffee shops bring in jazz artists more often than not.  soon after I realized this I became desperate for bluegrass music.   growing up in the midwest I was accustomed to finding bluegrass music on any given weekend…much like an enchilada.  I started to drool over the casual references of my many of my midwest friends who would just happen upon bluegrass music at their farmer’s market.  I was starving for bluegrass music and got concerned that my kids would never know bluegrass!!

then, my mother spontaneously sent us a new cd of two children’s artists called the okee dokee brothers…two friends that play bluegrass for kids. and well, we are now well fed on a new steady diet of okee dokee brothers.  their music isn’t condescending the way that kids’ music can be.  they are upbeat and folksy and sing about canoeing, camping, loving the river and being outside. for their latest album they spent 30 days canoeing down the mississippi river from minnesota to missouri making music and camping.  the cd is accompanied by a dvd of the whole adventure. 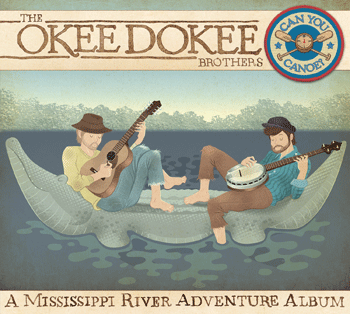 the boys and I are nuts for this.  we know all the songs and they literally sing these tunes constantly: they wake up belting out songs in bed; we pretend the stroller is a canoe and we sing our way to summer camp; we get the instruments out after camp is done and we make music videos in the backyard; they watch the dvd before dinner and then pretend to canoe in the bathtub.  the songs are sophisticated, lyrics-wise, but they boys know the words or they make them up if they don’t.

below is one of the many, many artistic interpretations of the okee dokee brothers themselves. 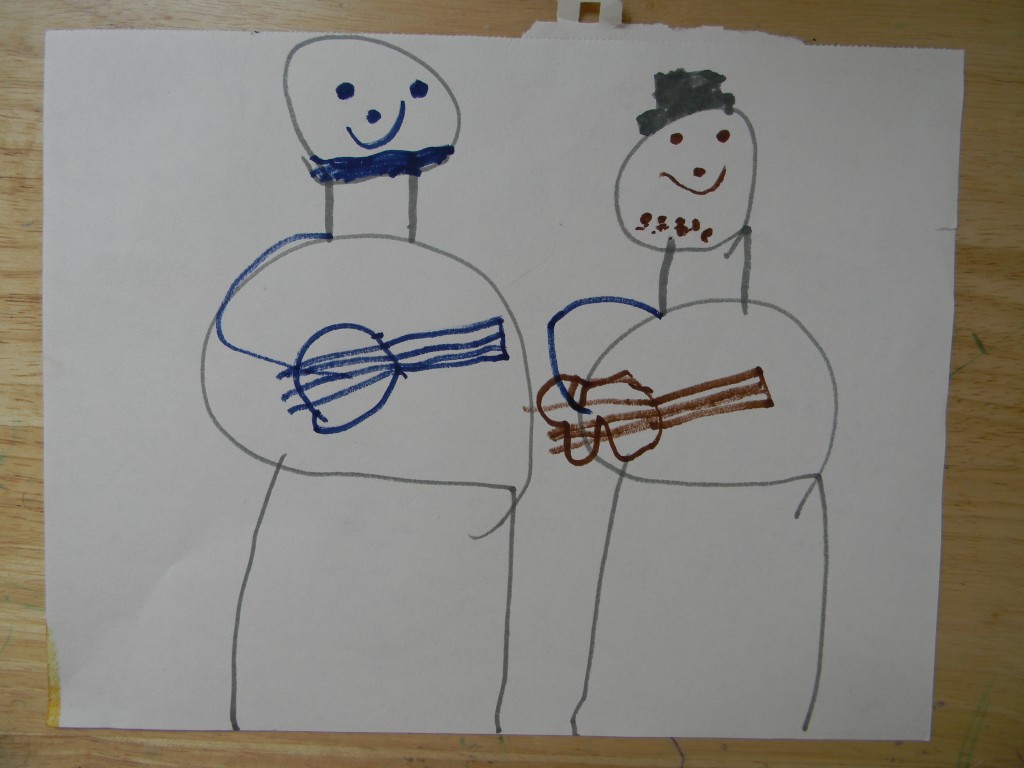 for my part, I have been floating ideas with my husband about starting a bluegrass music festival in our town and inviting the okee dokee brothers.  my mother has started planning a canoe trip in minnesota for us next summer.  I even found myself convincing a friend to teach me to play the banjo.  I am eating metaphorical mexican food by the plateful and it tastes wonderful.