I snuck in a little crafty making this past holiday…a mason jar sewing kit.  yup! pretty amazing.  as soon as I saw this fantastic tutorial from momtastic  I was obsessed and had to make one.

I fell in love with the oh-so-sweet idea of a portable sewing kit. because despite how modern and hip sewing becomes it still carries with it the legacy of mothers, aunts, grandmothers, great grandmothers and a handful of fathers and grandfathers, too.  there is no denying.  in my sewing classes (when we are not sewing, or course) we are exchanging information, discussing kids, gossiping, or looking to each other for support and advice.  as a friend pointed out, that is probably exactly what the age-old sewing circles were all about. she also believes old school sewing circles might have just formed the foundation for early feminism.  perhaps, it’s true. either way,  sewing connects people and has for generations.  all of that is a long way of saying, it might be a good idea to have a sewing kit that is handy and ready to travel. the only real making involved in this gift was transforming the jar top into a pincushion, which the tutorial illustrates beautifully. then I stuck fun semi-retro sewing supplies into the jar–a diaper pin for pulling elastic through casing, hand-sewing needles, plastic flower buttons, flat head pins, a tape measure, and I made the sewing weight. it all fits in a jar….and that is ridiculously cute if you ask me. 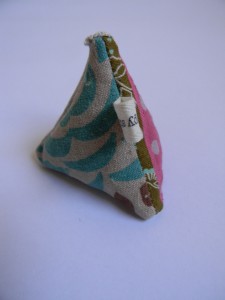