I was lucky this year when a burst of creative Christmas spirit coincided with some organizational forethought.  it doesn’t always work this way.  in fact, far too often those two seem at odds with each other.  but, not this year! no sir. I ordered Christmas fabric (from here) in early November rather than thinking of it mid-December and then deciding it was too late.  it was a proud moment.  and, with that fabric I made us a table runner in full Christmas glory. 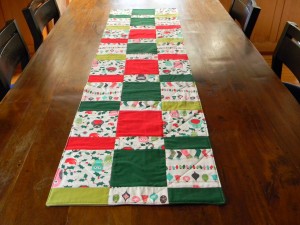 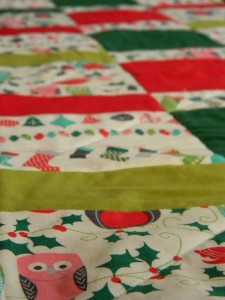 I like how this came together but I’m not exactly sure that I love it.  it’s a little bright and kitschy for me, in some ways.  but, I like the patchwork look and the mix of prints and solids.  the olive green adds something a little unexpected that is nice, I think.  but, I know the boys are going to love it. and, that isn’t something that can always be said about a table runner. 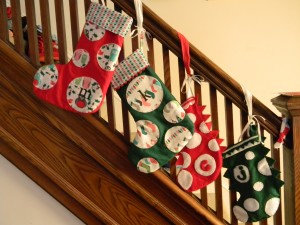 I also used some of the scraps to make stockings for my husband and myself.  the top two in this photo.  the bottom stockings were made for the boys a few years ago and I like them a lot.  but, the stockings I had made for my husband and I were getting ratty and were pretty poorly made a long time ago.  so, time for an update! (thank goodness I had Christmas themed fabric on hand! what great forethought on my part!) 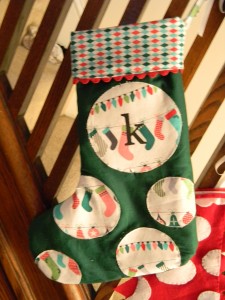 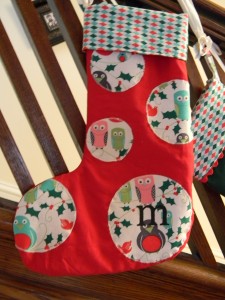 the quick and dirty guide to making these is as follows: I drew a basic stocking onto paper and then extended the top by 3 1/2 inches for the fold over and added a 1/2 inch all around for seam allowance. then, I cut 2 of liner, 2 of the outside fabric, and 2 pieces of light batting.  I decorated the outside fabric with appliqué circles–cut using my compass fabric circle cutter that is amazing and a little bit life-changing, by the way. also, with lightweight interfacing ironed to the back of the circles, they are much easier to sew on straight.

the lining stockings were sewn right sides together.  the now-decorated outside fabric was sewn the same way but with the batting sewn in at the same time–acting as the wrong side of the fabric.  then, place the lining stocking inside of the outside stocking with the wrong sides facing each other.  to finish, turn over the top 1/2 inch of the stocking and sew with a topstitch.  to apply the letter, I used a freezer paper stencil.  to add the ric-rac, I basically copied the way this tutorial applies it to cloth napkins. 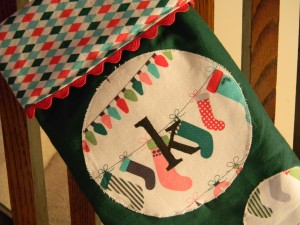 our oldest, C, is in hard-core pre-reading stage and is constantly stringing random letters together and asking if it constructs a word.  “mama. what about L-Y-I-S-R? what does that spell?”  a part of this phase involves showing off his growing knowledge of letters and so he sometimes calls everyone in the family by the first letter of their name.  the other day on a walk when his little brother ran ahead and I sped up to keep pace he said, “Hey! M! J! Don’t leave C behind!”  at dinner, he said to Papa…”I love you K.” it’s totally awesome.  so, the fact that our stockings are hung with all initials is making me really, really happy. the fact that the house is filled to the brim with Christmas kitsch is also making me really happy.  I’m sure it is all going to make me undergo some kind of minimalism freak-out in january.  but, that’s ok.  that’s what Christmas is for, right?