this Sunday marked my very first time selling at a craft fair.  (cue: applause!) it was so much fun.  I spent the entire time talking and standing until my heels and throat ached…and the fair was only 3 hours long. but, honestly, you could not shut me up. I was loving it (and a little bit nervous) so I just kept chattering.  the nervousness is partially a permanent fixture but also stemmed from a thought I had earlier in the week.  I will share with you this little insight into my crazy. it goes like this:

you know when you have a garage sale because you are moving really far away and you are selling stuff you actually really like? you pull it all together the week before and you are kind of sad to let it go.  you debate with yourself over a few things saying to yourself…oh, but I really like this! but, I can’t take it with me! I’ve got to purge!!  then, the day arrives and you set it all out on your lawn and all your stuff starts to look a little shabby and sad.

people come by and they pass it over with a quick, judgmental glance.  or worse, they drive slowly in front of your house; deem your previously-loved items unworthy; and then speed away.  suddenly, that stuff you actually liked begins to tarnish before your very eyes.  at the end of the day, you don’t even want to bring what remains back into your house.  you feel demoralized and low. you order takeout.

I got it into my head that it was going to go down like this at the craft fair.  the things I lovingly made working away in my studio were heading down this road of sadness.  I’d never done a sale before…I had no idea what people liked and my head just got spinning.  I had nothing to trust but my own aesthetic sense and alone in my basement studio there came some doubt…….nasty doubt.

but, guess what! it didn’t go down like this at all! it was the opposite. it was the road to happy! friends came to help out; people wanted to talk to me; to hear about classes; to touch and feel and love the things that I made! it was awesome.  little girls bought skirts and put them on immediately…then they did spins or insisted on wearing them to school the next day! baby bibs, crayon roll and bags are off in the world prepared for their very own adventure.  I met new, crafty, local friends like Jennifer and I left beaming. 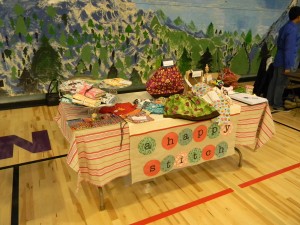 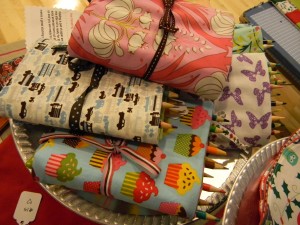 I was so worried about how things would go that I had had my husband count buttons and put them in a jar then I held a contest to see who could come up with the closest guess. the prize was a drawstring bag.  the contest was a huge hit, particularly with the under-9-female crowd. I mean a HUGE hit, girls were begging me to tell them how many buttons and dancing around talking about buttons.  in the end, I realized that I was in no position to be the one to tell them they didn’t win so I emailed everyone later to announce a winner. cowardly, I know. I could not handle the fallout.  (by the way, congratulations Jenn and Rebecca!! enjoy the bags!)

the two girls behind the table in the picture are my friends, though.   they were excited about the buttons, too, but they were honestly back there to help.  in fact, one of them held my hand for a while and told me stories in a really animated, fake-adult voice. it was probably one of the day’s highlights. 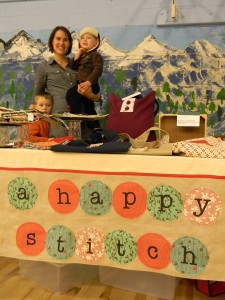 my boys arrived late in the day, they were thrilled to be ‘at my work’ and ran around like maniacs. all in all, the day was a little bit of chaos and a lot of fun…just the way I like it. 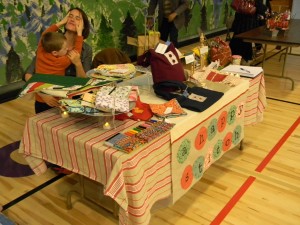 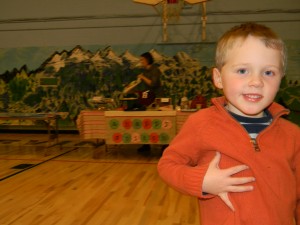 p.s. many of you have asked and yes,  I will definitely be updated and adding to the etsy shop this week. stay tuned.

p.p.s. thanks again to everyone that came out to see me. you made me sooo happy.