for a long, long time my oldest, C, was just simply not interested in art projects. he dreaded them, complained about them, and refused to participate.

as you can imagine, this made a little part of my heart ache. eventually, (perhaps developmentally?) he came around. now he loves art projects and is eager to join in. i noticed that part of what won him over was when the results of his effort were more vibrant and exciting.  for example, he was all over coloring as soon as i brought oil pastels into the mix and he had more than drab crayons to color with.   (have you ever noticed how awful some of the art supplies are for kids! like the crayons they give you for free at the restaurant that barely even work! why bother! it’s such a turn off to the whole process.)  anyway, i’m trying to be all over this one and think up some fun and exciting art projects. so, the other day we went on a walk and collected rocks for the express purpose of painting them. the boys thought this was great. “paint rocks!” it was very exciting.

i’d envisioned this project as being simple…we paint the rocks, add some eyes and shazam! pet rocks.  but, we didn’t have goggly eyes, just green dots and the boys didn’t want two green dots on some of the rocks they wanted lots of green dots.  so, green dots were added with abandon and each new creation was set aside to dry on little foam sheets.  pretty soon we had a growing company of rocks and it was beginning to look awfully nice. 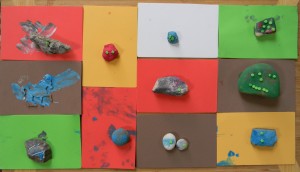 i’ll admit that i was responsible for lining them up quilt-like, in the beginning, but once it started it was C that decided which one went where.  in the end, both boys spent an honest 40 quiet, fully-concentrating minutes on this project, which is a lot for us. the best part? i really enjoyed this project and think it genuinely looks nice.  plus, i got a humbling reminder that my kids have their own innate sense of style and design and the best thing i can do is butt out.

this next project is basically the opposite.  i pretty much took charge and did most of the work (including the work of encouraging them to get excited about it) but it was totally worth it.  it’s so exciting.  SNOW GLOBES! ok, not snow globes but halloween globes but the same idea.  oh yes. homemade snow globes. let me say it again: snow/halloween globes. and, we made them. it’s so easy. 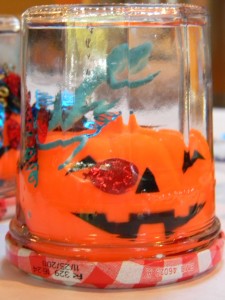 1. save up some jars with their lids and clean them.

2. find some stuff that fits inside.  this is a good things for kids to get involved in…’what fits? what doesn’t?

3. glue the stuff to the inside of the jar lid with hardcore glue, let it dry.

4. throw some glitter in the jar (we only had these metal party favors) and fill up with water (preferably distilled water if you want it to last a while) and a drop of glycerin to help the glitter float.

5. pop that lid on the jar and tip upside down.

yes, it is that easy. (we found glycerin at the health food store but i didn’t look very hard and i think we could have found it for cheaper elsewhere.)

here is martha’s version.  i can already tell you that we are going to be making a lot more of these for christmas.  if i had all the time in the world i fear that i would take this snow-globe making down a long, weird road…making little snowy worlds in a jar….i could get sucked into that, for sure.